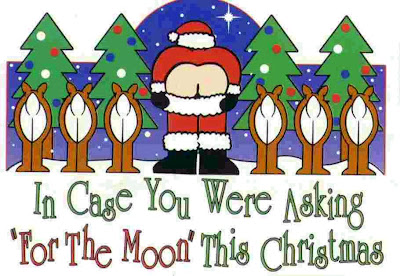 There were two blondes who went deep into the frozen woods
searching for a Christmas tree.

After hours of subzero temperatures and a few close calls with
hungry wolves, one blonde turned to the other and said, "I'm
chopping down the next tree I see. I don't care whether it's
decorated or not!"

At a monastery high in the mountains, the monks have a rigid vow
of silence. Only at Christmas, and only by one monk, and only
with one sentence, is the vow allowed to be broken.

One Christmas, Brother Thomas is allowed to speak and he says, "I
like the mashed potatoes we have with the Christmas turkey!" and
he sits down. Silence ensues for 365 days.

The next Christmas, Brother Michael gets his turn, and he says "I
think the mashed potatoes are lumpy and I hate them!"

Once again, silence for 366 days (it's leap year). The following
Christmas, Brother Paul rises and says, "I am fed up with this
constant bickering!"

'Twas the 'Net before Christmas

Santa Claus is modem to town 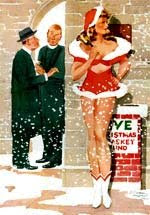 Up On The Desktop

Gateway In A Manger

INTEL IT On The Mountain

JAVA Yourself A Merry Little Christmas

Joy To The World Wide Web

The U.S. Supreme Court has ruled that there cannot be a nativity
scene in Washington, D.C. this Christmas. This isn't for any
religious reason though.

They simply have not been able to find three wise men and a virgin
in the Nation's capitol. There was no problem, however, finding
enough asses to fill the stable.

One day a man walked into a bar and sat down next to a guy with a parrot on his shoulder.

The bartender said, "Cute parrot, does he talk?"

The guy with the parrot says, "He does more than just talk, watch." The guy lit a match and placed it under the parrots left foot. Then the parrot started singing "Jingle Bells", it was a Christmas Parrot.
The guy then placed the match under the right foot and the parrot then started to sing "The 12 days of Christmas."

The bartender said, "That's incredible". He then asked, "What does he say when you place them between his feet?"

The guy said, "You know I never tried that, let's see."

When the match was placed between the feet of the parrot the parrot began to sing a familiar tune... "Chesnuts roasting on an open fire."

A mooning Santa Claus. For shame. Maryann looked over my shoulder when I was laughing at the blonde joke. She was saddened at the Southern view of a drawer dropping, North bound Santa.

Some monks don't know when to keep their mouths shut, do they?

I thought the blonde joke was perfect! I am blonde too.

OK LOVE the parrot joke and for the record I am so stealing it!!!!

I had to laugh at that blonde christmas story...hehehe