NO News is Good News, Isn't It?

I don't read the newspapers nearly as much as I use to anymore. Suffice it to say, I don't watch a lot of news on television either. It's as if the need to know has been outweighed by I don't want to know.

It's a sign of the times in the world in which we live, that the only news worth reporting is bad news. "Feel-Good" stories are relegated as fillers in newspapers and used to prevent fifteen seconds of 'dead air' time by the broadcast media. Even then, those stories are generally smarmy accounts of an image of the Virgin Mary found on a potato chip by some despondent person.

Today I broke my trend and started scanning the headlines in the Sunday paper. I was not surprised to find a sea of morbidity in varying sizes of bold face fonts.

It was enough for me to consider tossing the newspaper aside. As an after thought I challenged myself to keep reading the headlines to see how many, if any, nice stories I could find. First I turned to the comics to see if a laugh, or in the very least, a smile could lighten my mood.

What do I find instead, but a comic strip titled 'LIO'. That is one strange, sick cartoonist who is responsible for that piece of work. Someone needs to send that person a copy of a dictionary page with the word 'comic' highlighted. Unless I've been misinformed all these years, the word comic is synonymous with funny and laughter.

Besides passing over headlines such as those mentioned above, I was next faced with weeding out all of the political coverage. Can you believe it? There was next to no news left! 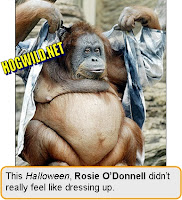 Then I found an article about a recent poll held by Parade Magazine in which they asked readers to name the "Most Annoying Celebrity." I was not surprised to see that Rosie O'Donnell came out on top. Do you know how hard it is to find a "flattering" picture of Rosie? I surfed around and finally found one:
Coming in a distant second was Paris Hilton, followed by Ann Coulter, and Heather Mills.

So where on the list are Hillary, Martha Stewart, Donald Trump, Peyton Manning (those stupid over-played commercials), and ________ (fill in the blank) ? The article only mentioned the top four vote-getters.

Ah, then I found a Boston Herald column by Mike Pingree that usually evokes from me a chuckle. His column can also be found on the Internet at Through The Looking Glass. He writes short vignettes from odd news stories from around the world. For example:

So, What Have You Two Been Up To? ... In 2000, a couple in South Wales adopted a 14-year-old boy from Kosovo. He developed a very close relationship with his foster-mom. Very close. He impregnated her when he was 19. The 34-year-old woman married the lad Christmas Eve. When he found out, her shocked ex-husband said he "began to think back to all the times they had spent together on their own."

Why Is Everyone Staring At Me? ... A man was arrested for drunken driving after he was observed getting out of his car in Los Angeles. He was 6-foot-4, 280 pounds, wearing a red lace camisole, purple G-string, a blonde wig and a Santa hat.

I remember his face, but I never knew his name. 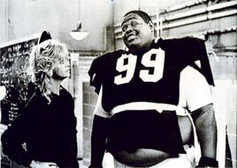 Actor and former NCAA wrestling champion, Tab Thacker has died after a long illness from complications due to diabetes. The 45-year-old Thacker appeared in such notable films as City Heat, Wildcats, Police Academy 4, and Police Academy 5.
(Pictured: Tab Thacker with Goldie Hawn in a scene from Wildcats.)

I seem to remember a phrase that was a motto for some newspaper: All the news that's fit to print.

QUESTION: When the hell are you going to print it?

No.1214
Curmudgeon responsible for this post: Hale McKay at 6:26 PM

Good news is not news. It is what is expected of everyone. Ergo, we get bad news or weird news. Commonly known as "no news."

Having eshewed (gesundheit) the newspaper back in '02, and TV news in '03, I get what I get from radio and the 'Net. Now, when I get a hankerin' to read what's going on the world from a newspaper, I read the Weekly World News. All the news that's so badly made up, it's funny. I especially liked the one about the couple that was kidnapped by aliens, taken about the alien ship, whisked off to their planet, and forced to appear on an alien talk show. That one rates right up there with proof that scientists have conclusive evidence that the Titanic was actually torpedoed and sunk by an alien U-boat, and icebergs are planning a class action lawsuit.