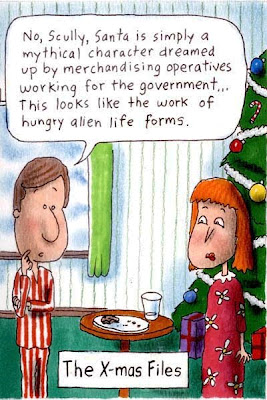 Mulder's obsession with all things paranormal and all things related to alien visitation was peaked during the weeks leading up to Christmas. He had only recently correlated the similarities of crop circles and the more mysterious phenomenon that had been referred to as snow angels.

"You see, Scully," he said to his skeptical partner, "the same forces are at work in the urban backyards as those in the crop fields."

"Mulder, you're wrong. These are just the acts of kids playing in the snow," she replied. "Haven't you ever made a snow angel?"

"Of course not! I'd have to buy her a drink or two before getting intimate."

Scully shook her head and said, "Then how do explain the footprints around the snow angels? It's obvious that they were left behind from the boots of children."

"Not so fast, Scully," he chided shaking his finger at her. "Children? Why not small alien humanoids?"

"Mulder, look where these footprints lead ... right to that snowman," she said pointing into the yard behind him. "... A snowman that these children made after rolling in the snow. Surely you've made a snowman before."

He shook his head in defiance, "Don't be ridiculous. You know I'm heterosexual!"

Before she could respond he walked over to the house and peered into the window. The view inside was dominated by a large decorated tree. His eyes widened as he was overcome with a sudden epiphany. He turned his head and called over his shoulder, "Scully. Here's all the proof we need."

She moved beside him and faced the window. "A Christmas tree? You're friggin' nuts if you think I'm going to accept this as an X-mas File case because of a Christmas tree in someone's house!"

"Okay? It's an angel. Lots of people top off their trees with an angel, Mulder," she replied.

"Not an angel, Scully, but a woman dressed up as an angel." He turned and faced her and added, "...A shrunken woman!"

His partner was speechless as he turned and walked over to the impression in the snow. "Hear me out. The aliens must have killed the woman right here in this spot. Her struggles on the ground created what everyone, including yourself conveniently call a snow angel."

She tried to interject some reason into her partner, "Mulder! Do you realize what you're saying?"

He ignored her and continued, "Then they performed their terrible experiment on her. They not only shrunk the woman's corpse, Scully, but then they shoved a Christmas tree up her ass!"

He looked at her and smiled as he watched her mouth gape open in disbelief. No doubt the magnitude of his discovery was beginning to become apparent to her. She finally managed to speak, "Mulder, I don't know what to say."

"I know, Scully," he said hugging her, "you are speechless in light of my brilliant discovery." He led her in the direction of the snowman in the middle of the yard. "Finally, their mission done here, the aliens then erected this edifice in the shape of a snowman - a geographical marker to signal the Mother ship."

Scully shrugged her shoulders and sighed in defeat. She spoke almost whispering to him, "I suppose the partially eaten cookies and empty glass of milk on the table beside the tree were consumed by these ... ah ... aliens?"

His eyebrows raised in surprise, "No, Scully. Those were tampered with by those who want the X-mas Files shut down. They fear we are getting too close to the truth. They made it look like Santa Claus ate the cookies and drank the milk."

Suddenly Scully pointed skyward and announced, "Mulder. It's ... it's a UFO! It's coming this way!"

Mulder grabbed her arm and said, "I'm afraid not. That's no UFO."

The two of them stood still and watched in silent amazement as the object moved through the night sky. There were strange tingling sounds, almost bell-like. He could feel his red headed partner trembling next to him. "There, there now, Scully. There's no need to be afraid."

"Afraid?" she said replied, "Who's afraid? I'm freezing! I left my coat in the car and I'm not wearing any underwear under my dress."

Mulder remained stoic and said, "See, Scully. It's no UFO. It's an agency trick to keep us from the truth. A covert agency has fashioned a flying craft resembling a sleigh pulled by reindeer. The operator in red must be a radio controlled automaton. No doubt it is powered by radioactive isotopes to prevent it being detected by radar. The power source is leaving no heat signature - it cannot be tracked."

He grabbed her arm and pulled her from the yard. They hurriedly ducked into their hidden car across the street. They watched as the object descended and appeared to land on or near the house next door. They could hear what appeared to be a human voice speaking in single syllables.

Scully suddenly pushed the car door open and attempted to step outside. Mulder quickly grabbed her by the arm and pulled her back inside. "Damn it, Mulder. That automoton, or what ever it is, just called me a "Ho!"

Moments later the object took flight and disappeared from view. They sat still scanning the sky in vain. The object was nowhere to be seen.

"Are you still cold, Scully?" he asked of his partner. When she nodded he placed his arm around her shoulder. As they cuddled together he looked down at the hem of the short dress she was wearing and spoke again, "Did you say you weren't wearing any underwear under that dress?"

She looked at him and answered, "Yes. Why do you ask?"

He placed a finger beneath the edge of the dress and replied with a grin, "I guess then ... the truth must be under there."

I hope you realize that now that you have given up this secret operation, you, and all who read it will be abducted and reprogrammed.

Usually you hear that once you are told you will have to be killed. Due to the season of the year, reprogamming is in order. Besides, all the ammo is needed in other locales.