The title of this post will have some thinking that I'm writing about guns, in particular the .45 caliber revolver. No, it has nothing whatsoever to do with the Colt .45 pistol.

That light bulb that just clicked on above your head - turn it off! This article is not a tribute to Colt 45 Malt Liquor (good brew) either. It has nothing to do with the drinking game, "Bottoms Up," which was created for Colt 45 Malt Liquor. (If you could hold your alcohol and you were playing against a member of the fairer sex, chances were good you would get lucky.)

Maybe I'm putting up something about Afroman and his Colt 45 lyrics? Nope. How about the WWE wrestler Colt Cabana and his Colt 45 maneuver? Wrong again. Before you ask, it has nothing to do with the TV western program, Colt .45. Don't worry, I won't bore you with the Colt 45 Major League baseball team which is now known as the Houston Astros.

It is at this point you have an epiphany! You have figured out that this post has to do with web searches and keywords. I am illustrating how one keyword can yield a plethora of unrelated topics and examples.

While this post has in fact cited quite a few findings under the heading of Colt 45, that was not the intent of this post. Having said that, such a theme has taken over the post to this point. I'll admit that the word "caliber" combined with "45" can easily evolve into "Colt 45."

Caliber (or calibre), when pertaining to guns means the diameter size of a bullet or shell; the bore of a gun measured in hundreths of an inch. It can also refer to the diameter of a cylinder body or its hollowed interior. Moreover, the word can also mean the degree of worth or value of a person or thing; quality or ability.

Think RPMs. Revolutions per minute as in NASCAR engines? Uh-uh! I'm talking 45 RPMs, as in records. Now, post-baby boomers cannot comprehend the concept of vinyl records. They cannot imagine that 45s at one time represented the "caliber" of the music that we baby boomers listened to, often with a nickel or a quarter taped to the tone arm to prevent the needle from sticking. 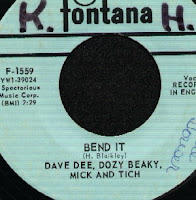 Imagine, those "hot wax" discs were monaural. We had hi-fi sound - we had never heard of stereo until many years later. In the picture at the right, that large black circle in the center of the label is actually a hole! We had to affix special plastic adapters in that opening before we could listen to the records on our record players.

Okay. The stage is set to explain why you have been reading through the gamut of guns to those ancient artifacts known as records. To be honest, I could have ended this post before the Johnny Carson quote above. I could have settled on a post about keyword searches and results. You lucky devils, you are getting a two-for-one post at no extra charge!

The idea for his post came, believe it or not, while I was watching a football game this afternoon. The color analyst had made a point of one team's defensive line "bending, but not breaking." Don't ask how or why, my mind picks up on things like this, but I remembered an old song from 1967. It was a song titled, Bend It by a group (Are you ready for this?) called Dave Dee, Dozy, Beaky, Mick & Tich. Yes, the pic above is a close-up of the actual record itself. 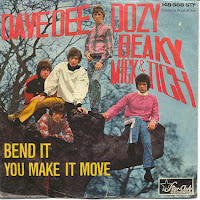 This pic (left) is of the paper jacket or sleeve for the disc to keep it from being damaged and dust free.

Some of the lyrics: Bend it, bend it, Show me you can move, And do the dance that's really in the groove, And ahhh...

It seemed like nearly every 60s group had at least one song about a newly created dance. Remember the Freddie ? The Fly ?

I wondered if it might be worth something. Online, I tracked down the title and found the pics above and the lyrics. I also came across an auction site on which a copy of the record had recently sold for $150 ! I became starry-eyed and wondered if some of the other 45s might be worth something. I decided that was a project for another day - between my wife and I, we have several hundred 45s stowed away in boxes.

It was when I googled "45s" that I found links to Colt 45. There you have it, where this post is/was going. Hmmm ... maybe that title, 45 Caliber Salute isn't so misleading after all!

No.1221
Curmudgeon responsible for this post: Hale McKay at 9:00 PM

You sure can weave a convoluted tale.

Thanks for making it easy to get to the primary goal.

Never heard of the group.

Maybe it is a function of long-used memory.

After a thorough perusal of this rather uniquely-achieved post, I can say with absolute certainty that it was not a total bust.

But it sure caused my screen a "whoa, DUDE!" moment.