The One's Have it!

You're the ones!
At 8:30 PM when I opened my site, my site meter greeted me with the above six figures - all ones! What a nice round number! How odd! 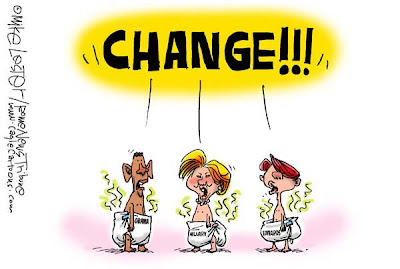 I was reading an op-ed piece yesterday titled Party-ism Is Destroying Democracy. The unnamed author of the article was advocating what some would call a drastic change in our nation's election process. While no registered independent polling organization was used to obtain his/her statistics and facts, I don't necessarily believe the numbers are accurate, but I do agree, however, in principle to the point being made.

The author estimated that nearly 65% of the voters in this country vote for a candidate based entirely on party affiliations. A large proportion of that number have party preferences based on their familial environment. In short, they tend to vote for the party their parents, husbands or wives, partners, older siblings, etc., vote(d) for. It is not unlike product recognition, wherein grown-up children tend to purchase and use the same brand name products as their parents.

In an address to the graduating class last fall, Grant Cornwell, philosopher-scholar and president of the College of Wooster in Ohio was quoted:

"You have the responsibility to develop your skills in writing, in speaking, but perhaps most of all in listening. Listen for differences. Seek them out. Don't surround yourself only with those who see the world as you do."

I like that quote! There is a message there that should be practiced by all responsible voters - to seek out the differences in the candidates and their policies. There are a lot of problems that face our nation, not the least of which are health care, war, long-term finances, education and the environment. How do the candidates stand on those issues versus those of the individual voters? Voters should not look for a comfort level of the candidates who echo their own beliefs and opinions. They should seek out the differences - different parties, different ideas, different solutions.

I remember when I was a kid, I once overheard my dad talking to another man about the upcoming elections. He said that he hated the S.O.B., (Dwight D. Eisenhower) but he had to vote for him because he was a Republican! I never forgot that, and to this day I think it was one the most asinine things I ever heard!

This afternoon I was talking with one of my clients, a WWII and Korean War veteran. A political ad sponsored by Mitt Romney was on the television. "I wouldn't vote for that man if they paid me," he said. I said to him, "Oh? You're a Democrat?" He answered in a huff, "Hell no! I'm a registered Independent."

It was refreshing to know that this old grizzled veteran wasn't as opinionated and party-happy as most of our senior citizens. That feeling was dashed in his next statement. "I don't like the way he wears his hair like he's some kind of pretty boy or something. Same goes for that Edwards fellow too."

Okay, I was partly right about him; he eliminated two candidates, one from each party. So, I guess I missed on the "opinionated" part of my original assessment. (Maybe hair style is legitimate method to choose who one votes for?)

I didn't have to wait long before he offered up some more tips on how one should select candidates. "And there ain't no way I'm going to vote for a black or a woman neither!" (Ah, so race and sex are viable reasons also!) "You won't see me voting for that Thompson clown. We already had one bad actor in Washington, and his hair looked like he stuck his finger in some electrical socket!" (Okay, scratch actors.)

"So you see, young fella, I'm narrowing the field down. Come Election Day, I'll be voting for the right man, and you can count on it!"

I said to him, "I see. Smart, very smart. By declaring yourself as an Independent, you are assured of voting for the best possible candidate. That means every voter who is a Democrat or a Republican will only be voting for the lesser of two evils."

I was a little disappointed that his lesson in politics and voting was over. At least I can now study all the candidates and know that by the time the elections roll around, I'll be voting for the right one.

One thing is certain, though. When it comes to looking for the differences in cadidates, I think this rough old veteran and the author of the above article are definitely NOT on the same page. (It's more than party-ism that's destroying democracy.)

No.1232
Curmudgeon responsible for this post: Hale McKay at 7:58 PM

Ah, the things we use to choose. I'm from a five generation Republican family, and I'm registered unaffiliated for the past almost 9 years.

If I were to base a vote based on one disagreeable issue, I'd rule out Obama for his ears, Hillary for her fat thighs, Edwards for his prissy hair, Mitt for being nicknamed for an oven utensil, Mike Huckabee for a ridiculous last name, Guiliani for being bald, Fred Thompson for his bulldog mug, McCain for his fat jowls, Ron Paul for having two first names, and the rest for being free spots on a bingo card.

Good thing I'm not basing my decision on that particular criteria ;)

LOL, Skunkfeathers! THat just might be as good a method as any.