At Home At the Movies 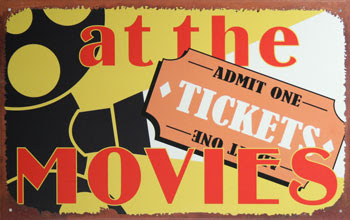 By the time Saturday rolls around, I will have spent three weeks convalescing at home with a serious case of cellulitis in my right leg. One thing that I learned, or rather had previously acquired knowledge reinforced, is the fact that day time TV sucks.

Bearing in mind as I was ordered to stay home and off my leg, such TV programming was conducive to creating boredom, ergo sleep! Mercifully Cable offers a smattering of alternative programs. For the most part, however, that offering manifests itself as an exercise in frustrating channel surfing.

Even my evening staples such as the Sci-fi, Discovery, History, Animal Planet, and National Geographic channels, etc., can be less than interesting in the day time.

How many reruns of episodes of Stargate:SG-1, and Stargate:Atlantis can I watch? Do I really need to "discover" the threats to the Great Barrier Reef again? How do you hold the interest of a condemned couch potato? Why, subject him to the "history" of the fast food industry, of course! The Animal Planet's Meerkat Manor is must-see TV if you are into zoology. Thanks to National Geographic I can observe a bunch of South American tribesman running around naked except for long hollow tubes over their willies!

Ah, yes. My Cable provider offers On Demand. They have an impressive menu of programs, including movies, that I can watch anytime I wish. There are many I haven't seen - as well as a few that I actually want to see - for free! They have several titles that are available the same day the movies are released on DVD at the video stores for a fee equivalent to the rental fees. The charge is just tacked onto the cable bill and eliminates the trips to the video store.

Against my better judgement, I decided to pay to see Michael Clayton. I thought day-time TV sucked! I should have known I wouldn't like this movie because of - George Clooney! This man CANNOT act! I'm sorry ladies, I know most of you like his handsome looks, but looks do not an actor make! I clicked it off after about fifteen minutes into the film. I've yet to see a movie featuring him that was even just okay - and that includes those "Ocean" rip-offs.

Gone Baby, Gone, directed by Ben Afleck,and starring his brother Casey and Morgan Freeman, was a GOOD movie. I recommend this film-noir feature. This one was worth the money I paid.

Tonight I will purchase another film, The Bourne Ultimatum. I have seen and enjoyed the previous two chapters of this trilogy. I am looking forward to seeing this one.

I have also partaken of several of the "free" movies from the "On Demand" menu. Stealth starring Jamie Foxx is a sci-fi actioner about a top-secret jet plane with artificial intelligence that goes out of control. Good special-effects. Underdog is a cute live adaptation of the cartoon series. Blade Runner/ Final Cut is a re-release of one of the best sci-fi films of all time, with extended scenes and added special effects. A great movie has been made even greater.

I also watched some free 'older' films that were well-worth seeing again. These included: Dr. Strangelove, The Sting, Short Circuit, Rainman, The Big Chill (love the sound track), and The Rocketeer among others. If you've never seen Being There you should. Peter Sellers is marvelous as Chauncey the Gardener who ends up making national policies for the White House staff.

I hope I didn't bore you with my "exciting" TV viewing as of late, but my life has been excruciatingly active over the past nineteen days and I had to share it. Well, goodnight. I'm off to settle in my recliner for a private screening of The Bourne Ultimatum.

(While on the subject of day-time TV, check out a list sampling some of the stupid answers given by contestants on the game show The Family Feud HERE.)

No.1274
Curmudgeon responsible for this post: Hale McKay at 8:21 PM

I have the "On Demand" service as well, a good way to watch movies. I've paid for a few, but nothing recently. You'll be back up and at 'em in no time Mike, hang in there.

If you get a chance, you might want to watch "Paris, Je T'aime". It has sub-titles. We really enjoyed it. We also enjoyed, "La Vie en Rose", "The Trip to Bountiful", "Breaker Morant", Secondhand Lions", "Akeelah and the Bee", and "Knocked UP" to name a few.

Glad to know that the leg is healing.

Day time TV has sucked forever. Prime time has joined it with the advent of "reality TV". I pulled my cable subscription in '04, and have been a non-TV watcher (save for renting DVD movies now and then) since then. Ain't missed a thing!