Milquetoast and Marmalade For Tea 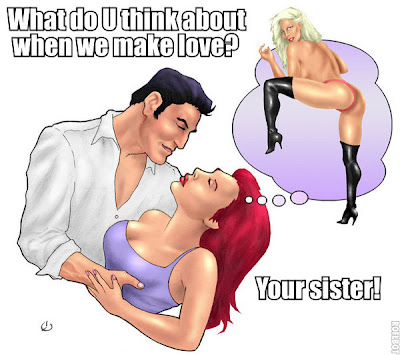 S & M
Cindy and Sally meet at their 30th class reunion, and they hadn't seen each other since graduation. They begin to talk and bring each other up to date. The conversation covers their husbands, their children, homes, etc. and finally gets around to their sex lives.
Cindy said, "It's okay. We get it on every week or so but it's no big adventure. How's yours?"
Sally replied, "It's just great, ever since we got into S & M."
Cindy is aghast. "Really Sally! I never would have guessed that you would go for that sort of thing."
"Oh, sure," says Sally. "He snores while I masturbate."

STILL HOT!
There was this couple who had been married for fifty years. They were sitting at the breakfast table one morning, when the old gentleman said to his wife, "Just think honey, we've been married for fifty years."
...."Yeah," she replied. "Just think, fifty years ago we were sitting here at this breakfast table together."
...."I know," the old man said. "We were probably sitting here as naked as jaybirds fifty years ago."
...."Well," Granny snickered, "what do you say - should we?"
Whereupon the two stripped to the buff and sat down at the table. "You know, honey," the little old lady breathlessly replied, "my nipples are as hot for you as they were fifty years ago."
...."I wouldn't be surprised," replied Gramps. "One's in your coffee and the other one's in your oatmeal."

DYING WISHES
A man went to the doctor, and the doctor told him he had only 24 hours to live. He goes home to tell his wife and after they both had a long cry over it, he asked her if she would have sex with him because he only had 24 hours to live.
.... "Of course Darling." she replied. And so they have sex.
Four hours later they are lying in bed and he turns to her again, and says, "You know, I only have 20 hours to live, do you think we could do it again?" Again she responds very sympathetically and agrees to have sex.
....Another eight hours pass, and she had fallen asleep from exhaustion. The man taps her on the shoulder, and asks her again, "You know dear, I only have 12 more hours left, how about again for old times sake?" By this time she is getting a little annoyed, but reluctantly agrees.
....After they finish, she goes back to sleep and four hours later, he taps her on the shoulder again and says, "Dear, I hate to keep bothering you but you know. I only have eight hours left before I die, can we do it one more time?"
....Well, she turns to him with a grimaced look on her face and says, "You know, you don't have to get up in the morning. I do!"

SERVICES RENDERED
An old gentleman in a nursing home placed a sigh on his door that announced "STUD SERVICE." Within a few minutes, and old lady seeing the sign went into his room and asked, "How much do you charge?"

No, replied the lady, "Four on the floor."

DOWN FOR THE COUNT
After a few years of married life, this guy finds that he is unable to perform anymore. He goes to his doctor, and his doctor tries a few things, but nothing works. Finally the doctor says to him, "This is all in your mind," and refers him to a psychiatrist.

After a few visits to the shrink, the shrink confesses, "I am at a loss as to how you could possible be cured."

Finally, the psychiatrist refers him to a witch doctor. The witch doctor tells him, "Sure, I can cure this," and throws some powder on a flame. There is a flash with billowing blue smoke.

The witch doctor says, "This is powerful healing, but you can only use it once a year! All you have to do is say '1-2-3' and it shall rise for as long as you wish!"

The guy then asks the witch doctor, "What happens when it's over?" The witch doctor says, "All you have to do is say, '1-2-3-4' and it will go down. But, be warned - It will not work again for another year."

No.1269
Curmudgeon responsible for this post: Hale McKay at 9:47 PM

Too hot was the funniest to me.

The leg is much better. I'm still fighting a head cold now.

On Monday I find out from the Doc if I return to work or stay home a little longer.