How To Beat A Speed Trap 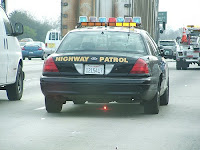 Top this for a speeding ticket!

Two California Highway Patrol Officers were conducting speeding enforcement on I-15, just north of the Marine Corps Air Station at Miramar . One of the officers was using a hand held radar device to check speeding vehicles approaching the crest of a hill.

The officers were suddenly surprised when the radar gun began reading 300 miles per hour. The officer attempted to reset the radar gun, but it would not reset and then turned off. 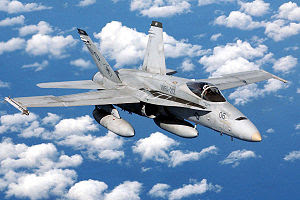 Just then a deafening roar over the treetops revealed that the radar had in
fact locked on to a USMC F/A-18 Hornet which was engaged in a low flying exercise near the location.

Back at the CHP Headquarters the Patrol Captain fired off a complaint to the SMC Base Commander. The reply came back in true USMC style:

Thank you for your letter. We can now complete the file on this incident.

You may be interested to know that the tactical computer in the Hornet had
detected the presence of, and subsequently locked on to, your hostile radar
equipment and automatically sent a jamming signal back to it, which is why
it shut down.

Furthermore, an Air-to-Ground missile aboard the fully armed aircraft had
also automatically locked on to your equipment location.

Fortunately, the Marine Pilot flying the Hornet recognized the situation for
what it was, quickly responded to the missile system alert status and was
able to override the automated defense system before the missile was
launched to destroy the hostile radar position.

The pilot also suggests you cover your mouths when cussing at them, since
the video systems on these jets are very high tech. Sergeant Johnson, the
officer holding the radar gun, should get his dentist to check his left rear
molar. It appears the filling is loose. Also, the snap is broken on his
holster.

Thank you for your concern. Semper Fi.

(I received the above in my e-mail from my truck driving buddy. Thanks, Earl.) 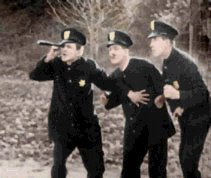 On Christmas morning a cop on horseback is sitting at a traffic light, and next to him is a kid on his brand new bike. The cop says to the kid, "Nice bike you got there. Did Santa bring that to you?"

The cop says, "Well, next year tell Santa to put a tail-light on that bike." The cop then proceeds to issue the kid a $20.00 bicycle safety violation ticket.

The kid takes the ticket and before the cop rides off says, "By the way, that's a nice horse you got there. Did Santa bring that to you?"

Humoring the kid, the cop says, "Yeah, he sure did."

A rookie police officer was out for his first ride in a cruiser with an experienced partner. A call came in telling them to disperse some people who were loitering. The officers drove to the street and observed a small crowd standing on a corner.

The rookie rolled down his window and said, "Let's get off the corner people."

A few glances, but no one moved, so he barked again, "Let's get off that corner... NOW!"

Intimidated, the group of people began to leave, casting puzzled stares in his direction. Proud of his first official act, the young policeman turned to his partner and asked, "Well, how did I do?" 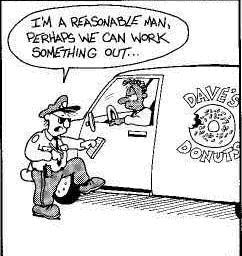 10. I can't reach my license unless you hold my beer.
-9. Hey, is that a 9mm? That's nothing compared to this 44 magnum.
-8. You must have been doing 125 to keep up with me.....good job.
-7. Sorry officer, I didn't realize my radar detector wasn't plugged in.
-6. I was going to be a cop, but I decided to finish high school instead.
-5. Wow, you look just like the guy in the picture on my girlfriends night stand.
-4. I thought you had to be in relatively good physical shape to be a police officer.
-3. Well, when I reached down to pick up my bag of crack, my gun fell off of my lap and got lodged between the brake and the gas pedal, forcing me to speed out of control.
-2. Is it true that people become cops because they are too dumb to work at McDonalds?
-1. I was just trying to keep up with traffic!

No.1293
Curmudgeon responsible for this post: Hale McKay at 9:52 PM

An officer pulls over a racing BMW, and tells the blonde at the wheel "Ma'am my radar clocked you at 75 miles an hour". Her response: "Oh, Officer, that's impossible! I've only been on the road for 10 minutes!"

The first one came through my email a month or so ago. It is still falling down funny. ROTFLMAO.

The rest are also much more than mildly amusing. Snerx!!!

The blonde jokes featuring confrontations with the law are always good ones.

Hmmm...In fact blonde jokes on any theme are usually good.

I figured that one has been circulating the e-mails.

Since this blog is smoking, do you have a non-smoking section!?! :o)

Loved it... will have to forward that one to my Marine.

I'm sure that sooner or later I'll have to bend to the pressure of special interest groups that I make this a non-smoking blog.

Thanks for dropping by.

When I was visiting your site, I saw that you had a son in the Marines. I'm sure he'll get a kick out of it if he hasn't seen it already.