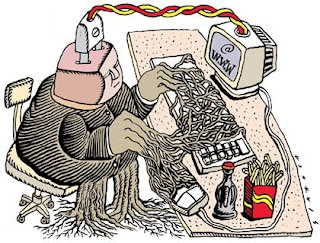 I never realized just how much my life centers around the computer. It's as if I and the machine have been integrated into components of the other.

There must be a Borg influence at work in the form of assimilation. I never really thought about my time on the computer in terms of hours, most likely because I didn't really want to know.

No, I never really realized how much time I spend plugged into my computer. That is until today when I found myself ... unplugged.

Actually, I got a new computer, well sort of. To be more precise, it is a newer one. It has almost twice the memory and in comparison its speed can be likened to a cheetah versus the snail-like precision of the older unit.

My son-in-law, who has forgotten more about building computers than I probably will ever learn, was handling the switch over. He estimated that it would take the better part of the day before I would be up and running. His installation chores included running new fiber optic wiring into the house from the main cable line, re-programming the modem, testing the system and finally loading the necessary software packages. 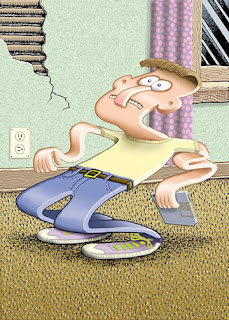 I found that it's one thing to be off-line because of choice, but it's quite another not to be able to go on-line when you want, because you can't.

After he completed the installation, I sat down and started loading some of the old files I had earlier copied to disc. These included a collection of jokes, cartoons and pictures. While I was doing that, I discovered I had a near encyclopedic tome of them relating to computers alone. Since it was 10 pm by the time I copied the files onto the computer, it only seem natural that today's post would have a computer flavor. 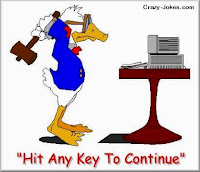 … you just hoped nobody ever found out!

The secretary changing the toner accidentally drops a pen into the office laser printer and can not retrieve it. She then makes up a sign to warn people of this problem. The sign reads: 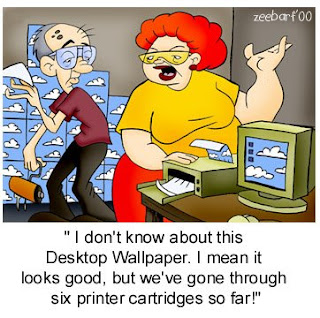 An artist, a lawyer, and a computer scientist are discussing the merits of a mistress.

The artist tells of the passion, the thrill which comes with the risk of being discovered.

The lawyer warns of the difficulties. It can lead to guilt, divorce, bankruptcy. Not worth it. Too many problems.

The computer scientist says "It's the best thing that's ever happened to me. My wife thinks I'm with my mistress. My mistress thinks I'm home with my wife, and I can spend all night on the computer!"

-1) - I will have a cup of coffee in the morning and read my PAPER newspaper like I used to, before the Web.

-2) - I will eat breakfast with a knife and fork and not with one hand typing.

-4) - I will make an attempt to clean the house, wash clothes, and plan dinner before even thinking of the Web.

-50 - I will sit down and write a letter to those unfortunate few friends and family that are Web-deprived.

-6) - I will call someone on the phone who I cannot contact via the Web.

-8) - I will listen to those around me about their needs and stop telling them to turn the TV down so I can hear the music on the Web.

-9) - I will not be tempted during TV commercials to check for email.

10) - I will try and get out of the house at least once a week, if it is necessary or not.

11) - I will remember that my bank is not forgiving if I forget to balance my checkbook because I was too busy on the Web.

12) - Last, but not least, I will remember that I must go to bed sometime... and the Web will always be there tomorrow!

I have yet to ever see a computer change-over that went smooth and trouble-free ;)

Computer has became part of our life, be it you like it or not.
I enjoyed reading this post. :)

Yes, the computer has become the center our individual universes.

Good to hear from you.

So far so good with the change-over. The only thing I have noticed is an annoying Anti-Virus program that seems to want update itself quite frequently (two or more times an day) - and I don't seem to have the option of stopping it from running.

It's one thing if it decides to update when I power up or when I'm powering down - but it's annoying when I'm on-line doing something and it "takes over."

Other than that - so far so good.