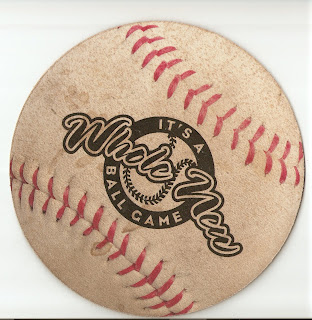 Today was a busy, hectic Sunday for me. I finally got to do some yard work this morning. It seems that if on the past several weekends it wasn't Memorial Day, my anniversary, Mother's Day, or Father's Day - it was raining! Today it wasn't supposed to rain until the evening and in the afternoon we were going out to an Outback Restaurant (her choice) to celebrate my daughter's birthday.

It should not have come as a surprise to me that the dark clouds of a thunder storm rolled in at about 1 pm. Within five minutes I was scurrying to put away my yard tools as the sky opened up ... At least I was able to trim the hedges and bushes and cut the grass in the front yard - not so the back yard - before the rains came.

By the time we returned from our meal, including a Bloomin' Onion, it was 6:30 pm and the rain had finally subsided. Oh well, half a yard completed was better than no yard completed.

I may have been deluged by rain earlier, but by that time I was not deluged with ideas for a post for today. So I started playing around with my new toy, the scanner. I looked for some of my old notebooks of drawings and sketches. I couldn't find the ones I wanted, but I did find one with drawings from my days of wood crafting and tole painting. Unfortunately most of the sketches were of the holidays, i.e., Halloween, Thanksgiving and Christmas. 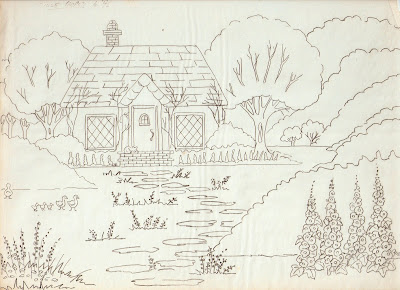 I did find the above "Cottage Mural" drawing in those notebooks. This picture is just one of eight drawings I used to paint a mural on a friend's kitchen walls. For an idea of the scale, it was 1 to 36 (one inch = three feet). There were seven different shades of green used in the finished mural. It took me three weekends in September of 1975 to complete the job. 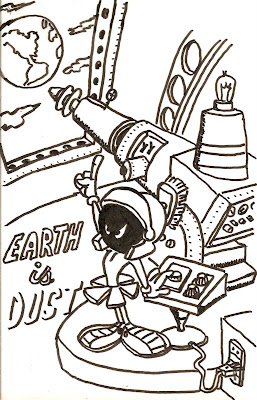 EARTH IS DUST
As a kid Marvin the Martian was, and still is, my favorite cartoon character. The sketch at the right was never finished and it never saw the light of the day since until I scanned it for this post.

Marvin's purpose in life seemed to be centered on blowing up the Earth because it was blocking his view of Venus. Invariably however, either Bugs Bunny or Daffy Duck as "Duck Dodgers," would appear and thwart his plans.

The little Martian as well as many other cartoon characters were featured on wood cut to the form of the character during my crafting days. Wood cutouts of Marvin the Martian, Betty Boop, Miss Piggy and the Smurfs were the most popular and my best sellers at craft shows.

Now that I am comfortable using a scanner, I am anxious to start drawing again. Until I do, I will occasionally post some of my old drawings. With yesterday's post, Poodle Doodles, I have decided that I will feature the comic strip on the weekends, both Saturdays and Sundays.

For today, here are the first three cartoons I drew of POODLE DOODLES: 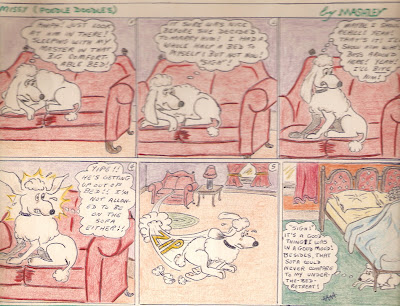 No.1385
Curmudgeon responsible for this post: Hale McKay at 8:08 PM

I do enjoy seeing personal creativity that I would never see if not for the world wide web,

I'm still impressed! That must have been a really nice mural.

I love those poodle cartoons. They're really cute and oh, so true.

Has it been three years since I/we have been blogging? Yours was the first "normal" blog that I found. I don't remember now if I found you or you found me.

My blog has moved around a bit, but I'm pretty happy now with in my Dogs with Blogs setting. I've been there for about 1 1/2 years and I think I'll stay put. It's easier for me to blog on behalf of the dogs. They seem to have a lot more worthwhile things to say!

There are a lot of would-be and wannabe artists and writers out there in the blogosphere. The web does offer them a chance to showcase their works to an audience.

Again, thanks for the praise.

Somewhere in my effects (where I don't know) I have some photos of the finished mural.

My friends since sold and moved and I don't know if the new owners kept the mural or had it painted over.

Most of the strips are based on actual happenings of Missy. Of course, some of the drawings and events are contrived - after all it is a comic strip.

Thank you, thank you. They were done to amuse myself originally.

I look back on them and they reflect our lives over a period of several years - a journal if you will.

You do cartoons too? Do you do windows? I love your Poodle Doodles.