Have You Got Eating on Your Mind? 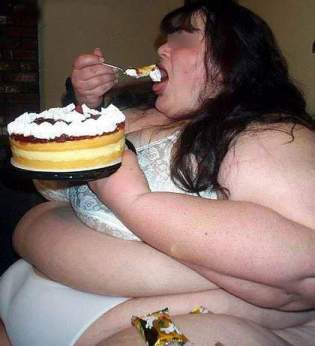 I don't think I can ever look upon a Boston Creme Pie in the same way again.

I think the woman in this photo has appeared at websites and blogs all over the web. This woman is that nameless soul who can be found in every town - everywhere. It would not be much of a leap of faith for me to state that all of us have seen such an individual in our travels.

She is a metaphor. She is a poster child for obesity.

Her picture is also a sad commentary on health and nutrition. I cannot pretend to know what goes on in the minds of people with out of control metabolisms and eating disorders. The picture evokes in me a gamut of emotions ranging from sadness and humor to pity and disgust.

It is said that people should not discuss with others sensitive topics such as politics and religion. I would add to those verboten subjects, personal matters, race and health. However, the syncretism of those topics doesn't mean that I necessarily adhere to the rule.

Politics, religion, personal matters, race and health are all staples of life itself. I believe life is wide open for discussion. I choose to look at the funny side of those sensitive staples in the form of either satire or parody.

For those who have personal issues, especially like those of the woman above, bear in mind that my intentions are neither mean-spirited nor insensitive to your conditions.

I saw this woman, or at least her metaphorical doppelganger, Thursday afternoon in one of those dens of culinary iniquity known for dishing out fast foods. The place specializes in pizza and sub sandwiches.

She was sitting in a back corner, alone with a tray of food. A veritable smorgasbord was neatly arrayed upon the table in front of her. There was a large sub, an order of fried onion rings, a bag of potato chips, and a 20 oz. bottle of Diet Sprite, none of which were to be left unconsumed.

While I waited for my order, I tried not to notice how deftly she maneuvered the sub sandwich toward and into her mouth. The scene was reminiscent of a sword swallower plying his act.

Lo, what did I see but that which was previously hidden behind the bag of chips, but a large slice of Boston Creme Pie?

I don't know why or how it came to my mind, but I was suddenly creating a parody of a song in my head. 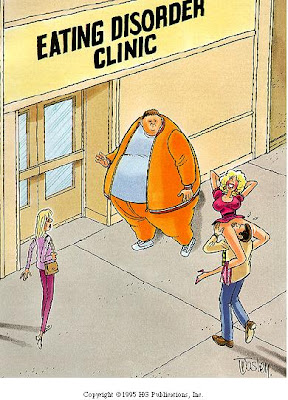 Feel free to sing along.

(With apologies to
Gary Puckett and the Union Gap)

Something's wrong between us
That your chewing cannot hide,
And you're not afraid to order it super sized
And lately when they feed you, I know you're not satisfied.

I've seen the way chefs look at you
When you're reading their menu
And it hurts to have them think you're that hungry
But it's knowing you're having seconds
That's really killing me.

A woman wears a certain look
When she wants more to eat,
And a man can tell that dessert's on her mind
I hate to have to say it
But that food's all over you.

LMAO...Gary Puckett's not gonna be happy with you...especially if you've written a *BIG* hit ;)

You are such a great read! Like I've said before, I don't always comment, but I come back for more because nothing compares to you. LOL

All the monies profits from the royalties will go the Foundation For the Preservation of Boston Creme Pies.

Knowing you're reading is good, but reading comments is also good.