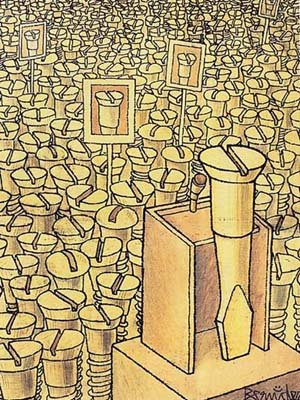 Hello I'm Tom Brokejaw reporting from the Honey-Do Workshop, home of the 2008 Slot Head Screw Convention. Tonight the Slot Head Party will elect its candidate to run against the Phillips Head candidate for the right to screw our nation.

There is excitement at the National Slot Head Convention as the musical group Screw Cheer sings the last line to their "fastenating" hit:

There ain't no cure for the summertime screws...

The Speaker of the Shed is about to take the podium to address drillegates on hand. There are literally thousands of shiny brass slotted screws gathered for this big event. Let us listen as Senator Chip Screwsdale speaks.

"Flatheads and Roundheads, follow me by reciting our national motto."

"Screw unto others before they screw unto you."

"As you know our party has long been divided into two factions, the right and left wing nuts. I say if we want a successful run for the White House Depot, we must be unified. We must rally around our candidate and wage a nuts and bolts campaign all the way until the voters select the right screw.

I say, let's show the public that if they want to be screwed, we are the ones best equipped to screw them! We cannot screw one way either. We will screw them both ways - in and out - every which way but loose!"

Brokejaw:Senator Screwsdale has whipped up the drillegates into a screw frenzy. Our news crew must be careful not to turn our backs to this screw-crazed crowd or to bend over, otherwise we ourselves might be screwed.

We've had eight years of the lame duck Phillips Head President and many Americans feel it is time for a change. Both parties know that John Q. Publics' asses are soft pine and are susceptible to some new screwing.

So America in November you must decide who you want to screw you. You must ask yourself who will screw you the most. Who will most likely screw America? Who will screw justice?

Either way, you're going be screwed. Like the cartoon, it won't be the first time!

No.1480
Curmudgeon responsible for this post: Hale McKay at 8:27 PM

I think youu've said it all.

I had to link this. Please forgive?

it would be funny if it weren't so true

In the category of sad but true.

It's allegorical, but sadly true.

No problem. Thank you.

I'm afraid I find it funny because it's true.

(Love that name.) I concur.