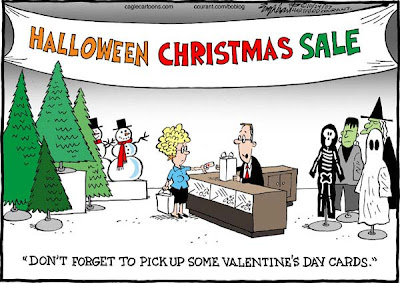 It has gotten to the point that if we didn't have calendars hanging on our walls or sitting on our desks, we would have no idea if we should be shopping for Halloween candy, picking up a turkey, buying Christmas gifts, or selecting that perfect card for our Valentine sweethearts!

Heaven forbid if we also happen to have friends and loved ones celebrating birthdays and anniversaries during this time of the year.

If it isn't bad enough that we are confused about the holidays, now we have to rethink what is and isn't a racial statement.

The "Trick-or-Treating" game has been in play ever since Hillary was swept under the rug after her failed dirt war with Obama. Whether intended or perceived, the Obama camp has decried nearly every word spoken by McCain as racially insensitive.

It seems that the Obama supporters are scared out of their wits by Republican remarks, and they aren't wearing scary costumes.

Elizabeth Edwards of the Democratic Underground website suggested that Sarah Palin's white suit jacket evokes images of the Ku Klux Klan! Said an unnamed Obama-cite, "She might as well wear a white hood and set a cross on fire." A poster to the site referred to her as the Grand Princess of the KKK.

Let me see if I have this right ... If she's wearing white stockings, drinking vanilla milkshakes and is referring to budgetary black holes, these are racially charged incitements? Perhaps she should drink more coffee — without cream — to avoid blinding us with her bright white teeth.

So where does that leave me? For starters, I don't know which holiday to celebrate. Secondly, it is apparent that I can see the difference between black and white. Why can't Obama and his supporters?

Thirdly, which costume should I wear on the 31st? 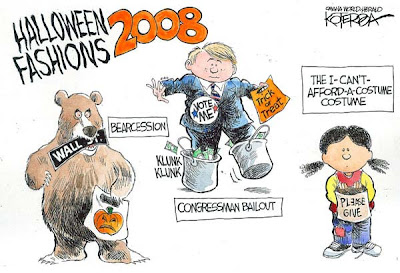 No.1507
Curmudgeon responsible for this post: Hale McKay at 9:51 PM

I don't know why they can't see the difference. They are so busy calling us ignorant or a racist that they miss just about everything. I'll be so glad when it's over. I'm so tired of it all. Have a great day. :)

We are all sick and tired of it - it's been going for two solid years now!