Turkey in the Raw 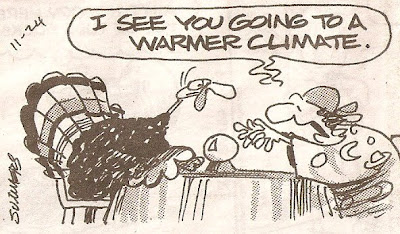 2008, The Year of the Recessionary Thanksgiving 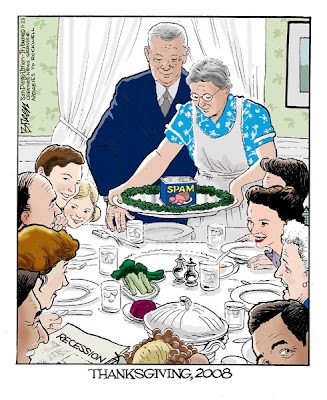 It is no longer a random occurrence. No, it has become the accepted norm. Slowly and inexplicably our holidays are being merged into one mega-holiday.

This year I saw the first of the Halloween paraphernalia appearing next to the back-to-school supplies display in late August. The weekend before the start of school, the books and pencils were moved back into the stationary section. The space vacated by pencils and notebooks was filled by expanding the Halloween goodies. Around the middle of September a few token Thanksgiving items appeared. 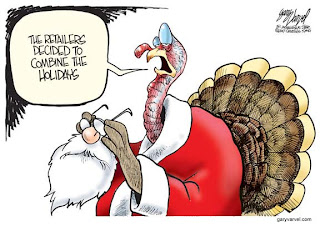 On October the 30th a smattering of Christmas stuff were being introduced. On the morning of Halloween the masks and bags of candies were being moved to the 20% off display. By noon time of the same day the trick-or-treat items were reduced by 40%. By sunset, while the costumed kiddies were out plying their trade, the remainder of the Halloween goodies were 50% off. 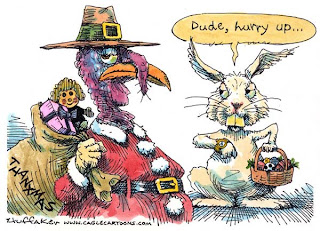 On the first of November the Halloween items were reduced further to a 70% discount. A few more token items for Turkey Day appeared but only if shelf room remained while the Christmas material was being placed on display. Thanksgiving sales of gift items are negligible; that holiday is obviously most profitable to food stores.

Before the calendar reads December 25, there is a slow influx of Valentine's Day products. We will have barely enough time to dodge Cupid's arrows when the Easter Bunny will hopping down the bunny trail and leprechauns will be hiding their pots of gold.

Soon after that there comes Memorial Day, Mothers and Fathers Day and the 4th of July! In about a month and a half after the fireworks displays and the flag waving, the back-to-school supplies are being priced and shelved.

So it is we will have come full circle - the cycle of life in a year of our lives.

With Thanksgiving Day only 48 hours from now, should we or shouldn't we be thankful for the concept of free enterprise born from our democratic and capitalistic manifesto? What of the original inhabitants of this continent, the Native Americans. What have they to be thankful for? That we allowed what remains of them to stay and to become citizens? That we allowed them to become one of us?

I wonder, had the Native Americans the chance to do it all over again, would they have greeted the Pilgrims with open arms? Would they have shared in repast with them on that first Thanksgiving? Or would they smacked them up the side of their heads with that Plymouth rock? 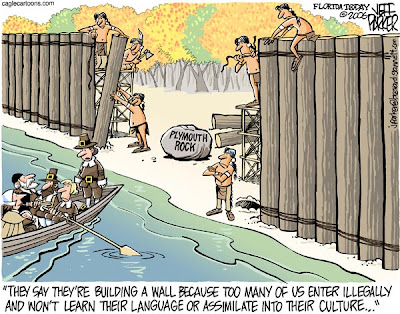 I trust and hope that each and everyone of you out there will have a wonderful and bountiful Thanksgiving.

Go by and pat Plymouth Rock for me, since my ancestors landed there, before the wall ;)

You have a great Thanksgiving too. :)

they should have rocked their world.

Well if someone will hold me the ankles and dangle me over it, I'll do just that.

And a Happy Turkey Day to you.

A Happy Thanksgiving to you and yours.

They had some wacky tobacky in those peace pipes - they were stoned.