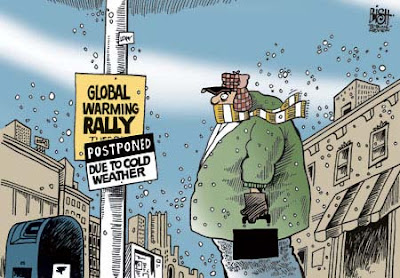 Hey, Al Gore! You gonna give back that Nobel Prize?
Or are we gonna have to take it from you?

The same goes for that Oscar! 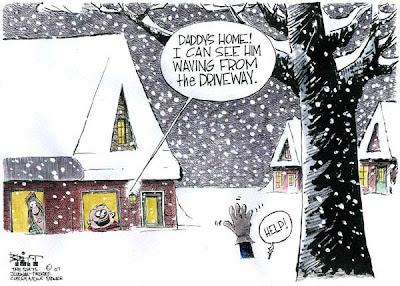 Hey, Al. I am looking for the DVD copy of your movie.
It's buried under two feet of snow!

I'd be remiss not to give you some credit.

Thank you for the Internet!

Winter in Oz
It was April, and the Aboriginals in a remote part of South Australia had asked their new elder if the coming winter was going to be cold or mild. Since he was an elder in a modern community he had never been taught the old secrets. When he looked at the sky he couldn't tell what the winter was going to be like.

Nevertheless, to be on the safe side, he told his tribe that the winter was indeed going to be cold and that the members of the tribe should collect firewood to be prepared.

But, being a practical leader, after several days had passed he had an idea. He walked out to the telephone booth on the highway, called the Weather Bureau, and asked, "Is the coming winter in this area going to be cold?"

The meteorologist responded, "It looks like this winter is going to be quite cold." So the elder went back to his people and told them to collect even more wood in order to be prepared.

Two weeks later the elder called the Weather Bureau again. "Are you absolutely sure that the winter is going to be very cold?"

"Absolutely," the man replied. "It's looking more like it is going to be one of the coldest winters ever."

"How can you be so sure?" the elder inquired.

The weatherman replied, "There are reports that the Aboriginals are collecting firewood like crazy, and that's always a sure sign."

Snow Emergency Parking
Bob and his wife live in Toledo, Ohio. One winter morning while listening to the radio, they hear the announcer say, "We are going to have 8 to 10 inches of snow today. You must park your car on the even numbered side of the street, so the snowplow can get through." Bob's wife goes out and moves her car.

A week later while they are eating breakfast, the radio announcer says, "We are expecting 10 to 12 inches of snow today. You must park your car on the odd numbered side of the street, so the snowplow can get through."

Bob's wife goes out and moves her car again.

The next week they are having breakfast again, when the radio announcer says "We are expecting 12 to 14 inches of snow today. You must park..........." then the electric power goes out.

Bob's wife is very upset, and with a worried look on her face she says, "Honey, I don't know what to do." Which side of the street do I need to park on so the snowplow can get through?

With the love and understanding in his voice like all men who are married to Blondes exhibit, Bob says, "Why don't you just leave it in the garage this time?"

AlGore is what he is: a moron seeking validation. And he has moronic peers to aid him. Hollywood and rogue enviros with political/economic agendas that don't give a damn about polar bears or US citizens; only about how they can perpetuate a blatant scam of human-caused global warming on a dumbed-down-education US populace.

What Skunkfeathers said. Right on the money.

You are so right. Gore and Gore-ites are looking for their palms to be greased by the manufacturers of windmills, solar panels, etc.

Skunk summed it up pretty good, didn't he?

Discretion is the better part of valor. snerx, again.

Nice piece of information, I had come to know about your internet site from my friend venki, Vizag,i have read atleast 12

posts of yours by now, and let me tell you, your website gives the best and the most interesting information. This is just

the kind of information that i had been looking for, i'm already your rss reader now and i would regularly watch out for

the new post, once again hats off to you! Thanx a ton once again, Regards, bob marley quotes