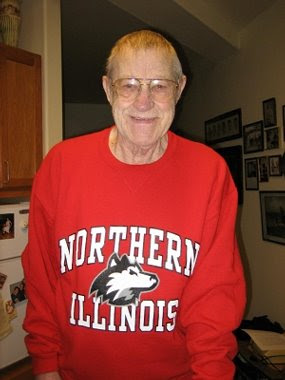 It's a post I have dreaded that I might have to write some day, and knew that I would.

Gene, aka Old Horsetail Snake , left this world as he had planned - on his own terms. He will be sorely missed.

Hoss, as he was affectionately known, was one of the first bloggers to visit and to comment on my site back in the early months of 2005. In turn I became an avid follower of his, not missing a single post that graced his site, right up to his last on the 24th of February.

I learned a lot from him, verifying that old adage that you're never too old to learn. I learned that it's all right to be funny (even silly), sarcastic and serious and still be true to myself. Following his example, I made many blog friends - and we all know, you can never have too many of them.

A good portion of my blogroll is made up of those who appeared on his. I figured that any blog he liked to read, just had to be a blog worth reading. I was right. The same was true of those who left comments on his postings, for surely they too were good bloggers. Right again.

Hoss, if they have Wi-Fi up there and you're reading this: you made your pile, my friend. 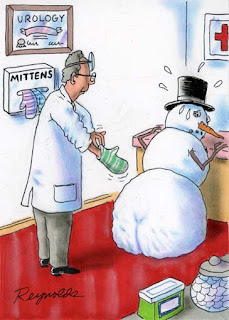 I'll never look at butt-crack cartoons and jokes the same again without being reminded of Hoss' "war" against that particular form of southern exposure.

He'd have posted the one at the right had he found it. How apropos, a proctologist donning mittens to examine Frosty!

One of my favorite features of his posts were his often funny, if not accurate "My favorite word of the day." Like this one:

My favorite word today is sanity. N., keep hoping. Def.: Statistics say that one of four persons is suffering from some sort of mental illness. Think of your three best friends. If they're okay, it's you. 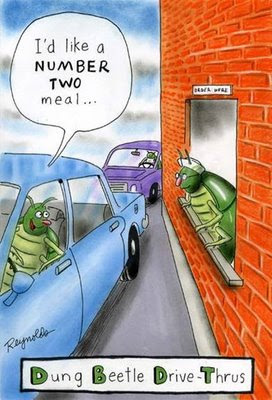 Hoss was well noted as being a champion of the lowly dung beetle.

I couldn't bear the thought of paying tribute to him without putting up a dung beetle cartoon. I'm sure he would have liked this one.

(This cartoon was borrowed from Kenju,another of Hoss' early blogging friends.)

While Gene feared reintarnation, coming back as a hillbilly, he was a staunch believer in reincarnation. If anyone can come back, it would he that defies the odds and accomplishes the feat.

For more tributes to this wonderful and funny man read the comments of other blogging friends at the following two links:

May Gene rest in peace, he will be sorely missed...sniff...

Indeed, he will be missed.

Hale, I am glad to see you and so many others posting about Hoss, because I am not sure I can do it properly. I'm glad you stole my cartoon; I know Hoss would have loved it (if he hadn't seen it already). He was one of the first people to consistently comment on my blog and we had a lively email correspondence from time to time. He was one in a million. I wish I had met him in person. We would have been life-long friends.

It was not easy to write this.

Hoss, like both me and you, all started blogging at roughly the same time four years ago.

I too, wished I'd met him in person like so many others have.

Thanks. I don't think I've said anything that nearly everyone could have said.

Thank you. Yes, we have lost a friend, but it is aalso a loss for those who never got to know him.

Gene will be missed as he was so loved in the blogsphere.

Yes, he was well loved - and he will be long remembered.

I suspect there will references to him and his posts all over the blogosphere for years to come.

Oh my God!! I've not been doing my blog rounds for a while & didn't know. RIP Gene. I too will miss you big time.

I have read many of his comments plastered here and there but never looked at his blog until today.
Gene Maudlin.
There was a Gene Maudlin in my high school class but I think he was born about three years later.
This was in Tekamah, Nebraska. I haven't seen this Gene since graduation.
Anyway Hoss was quite a character in the blogging world. I enjoyed his comments a lot.
Thank you Hale, for closure on his end. I was missing him from the here and there.
..
After all this I am thinking my friend may have spelled his last name 'Modlin.'
..

Oh my! I have been so out of touch due to health issues with family, I wasn't aware of Hoss passing. How sad, he was a terrific friend and great blogger. He will sure be missed. I'm sure he's chasing the angels around in heaven.

Don't stop posting such stories. I like to read stories like that. BTW add more pics :)
BlindSniper

Interesting blog you got here. I'd like to read more concerning this theme. Thnx for giving this information.
Joan Stepsen
Cyprus escort girls

Interesting article as for me. I'd like to read something more about
this topic. Thank you for giving that data.
Abba
ukraine Kiev escort

please remove both the cartoons from this site: Dung Beetles and Frosty getting examined by proctologist with mittens.
They are mine and copyrighted