The Bird Is the Word

Hey Guys, a Piece of Advice:

Some Gals Are Wise When You Say,
"Oops! I Dropped My Spoon!" 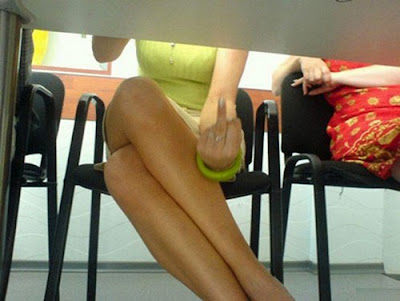 History of 'The Bird'
In the film, Titanic, the character Rose is shown giving the
finger to Jack (another character). Many people who have seen the film,
question whether "giving the finger" was done around the time of the
Titanic disaster, or was it a more recent gesture invented by some
defiant teenager! According to research, here's the true story:

Before the Battle of Agincourt in 1415, the French, anticipating
victory over the English, proposed to cut off the middle finger of all
captured English soldiers. Without the middle finger it would be
impossible to draw the renowned English longbow and therefore be
incapable of fighting in the future. This famous weapon was made of
wood from the native English Yew tree, and the act of drawing the
longbow as known as "plucking the yew" (or "pluck yew").

Much to the bewilderment of the French, the English won a major upset
and began mocking the French by waving their middle fingers at the
defeated French, saying, "See, we can still pluck yew! PLUCK YEW!"

Over the years some 'folk etymologies' have grown up around this
symbolic gesture. Since "pluck yew" is rather difficult to say (like
pleasant mother pheasant plucker," which is who you had to go to for
the feathers used on the arrows for the longbow), the difficult
consonant cluster at the beginning has gradually changed to a
labiodental fricative 'F', and thus the words often used in conjunction
with the one-finger-salute are mistakenly thought to have something to
do with an intimate encounter.

It is also because of the pheasant feathers on the arrows that the
symbolic gesture is known as "giving the bird." And yew all thought yew
knew everything!

Biblical Birds
The Old Testament contains several warnings about the evil of the digits. In Isaiah 58:9-10 it says:

"If you remove the yoke from your midst, the pointing of the finger, and speaking wickedness, and if you give yourself to the hungry, and satisfy the desire of the afflicted, then your light will rise in darkness, and your gloom will become like midday;"

indicating that a finger pointed with scorn is an act of which God disapproves.

Elsewhere, in Proverbs we find:

"...A worthless person, a wicked man, goes about with crooked speech, winks with his eyes, scrapes with his feet, points with his finger, with perverted heart devises evil..."

indicating that those who accuse others of wrongdoing only spread more evil, or that lecherous old men should just keep it in their pants. Unfortunately, because the Bible doesn't specify exactly which finger is the source of all evil, it's impossible for us to know if we are damned. That's might just be wishful thinking though. It might be safe to assume God hates The Finger.

How To Give the Bird ¹
You'd be surprised how many people don't give The Finger correctly. Save yourself from unnecessary embarrassment by going over these few simple steps.

1) Extend either arm at an approximately 90° angle perpendicular to the body.

2) Bend arm at the elbow. Position it parallel to the body, forming three sides of a perfect square.

5) Hold approximately 10 seconds to a minute for emphasis.


Be Strong. Be Proud. Then Flip. Remember: You are the master of your own bird. 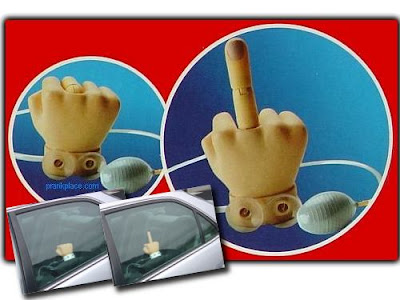 Keep Your Eyes On the Road
and Let the S.O.B.s Know What You Think of Them

Nowadays, I tend to opt for the word over the bird. I guess I'm an old softie for saying what you mean, and meaning what you say ;)

Everything you wanted to know about the 'bird', but were afraid to ask. I love it.

hahaha this is so cute.. but honestly I never know who originated this bird's sign. but not in any circumstance that used it though.

First time visit here.. Have a nice day... hope to see you back.

I like the auto accessories, where can I find it?

Thanks for sharing this one, I enjoyed reading your post. I'll be back more often, great posts here.

This is cool.. it didnt come to my mind either. I agree with Sandee, all things we wish to know about the 'bird' but hesitant to ask.

Have a pleasant day.

As usual, you have provided an enlightening bit of useful information. One ought to be correct in all of one's actions.

Thank you for sharing your erudition.

I suppose whether you say it or display it - the meaning's loud & clear.

Consider a gesture of public service to keep my readers well informed.

Welcome. Thanks for the visit and hope to see you again. (I'll pay you a visit, of course.)

Actually the "auto accessories" can be purchased on line at Prank Place.

Please do visit again. I'll be checking out your site too.

Thanks for the visit. A pleasant day and many more to you also.

Nothing spoils a good moment to flash the bird than to have someone perform it incorrectly.