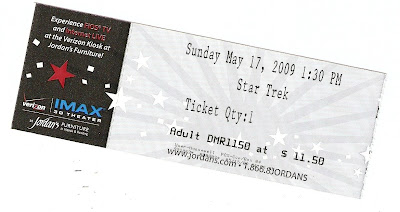 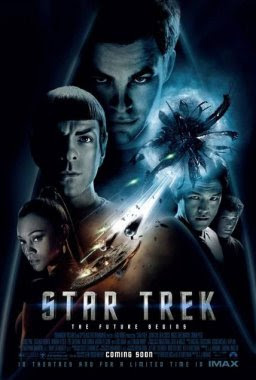 You don't have to be a Trekkie to enjoy this movie!

On Sunday my daughter, my son-in-law and I went to see the latest addition to the Star Trek franchise.

On what was my first trip to an IMAX theater I could not have picked a better movie to experience sitting in front of a screen 52 feet high by 72 feet wide.

If it isn't mind-boggling enough to watch a film on such an enormous screen, but every explosion can be felt as vibrations within the seats.

The movie is a reboot of the original TV series and reveals how the original crew came together. Updated with today's special effects it is easily the Star Trek film to date. We can be certain that there will more films in the series to come.

If you haven't seen the movie yet, it's a must see if you are a fan of Star Trek. If there is an IMAX theater near you and this movie is playing there - GO - go see it! You won't be sorry.

WOW! What A Ride!

What's the best way to get into a sleeping bag?
Wake her up first.

A young woman ran to her mother and said ecstatically, "Tim passed his bar exam, so we're going to get married next spring."

"Gee, honey," her mother replied, "he'll be real busy. Don't you think you two should wait till he's been practicing for a year or so?"

Any guy thinking about asking a woman for hand in marriage should look at all the definitions of "engagement." One reads, "to do battle with the enemy."
☺ ☺ ☺ ☺ ☺

The recently married young woman was weeping and pouring out her heart to a marriage counselor. "Isn't there some way - without turning into a nag - that I can keep my husband in line?"

"Well," he said, "maybe that's the problem. Your husband shouldn't have to wait in line."

Drug Trafficking is Bigger Problem Than We Think

I haven't been much for "prequels", so to speak, but the buzz is so positive about this one, I'm going to have to break my own rule and venture by to see it ;)

I stole one of your jokes. Bwahahahaha. I gave you credit though.

This movie just jumped ahead of "The Revenge of Khan" as my favorite Star Trek movie. It's that good.

this is the real meaning of engagement. I should be able to read this before i got married ha ha ha.

Anyway, I am now Generals after 8 years of continuous engagement.

would you care for exchange link?