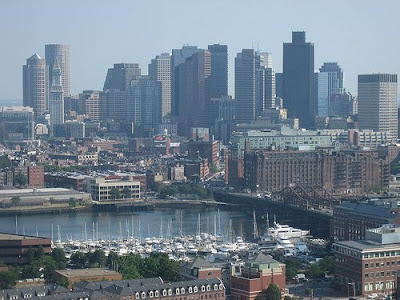 When traveling overseas to foreign lands and foreign cities, one of the first obstacles you are likely to encounter is the language barrier.

When traveling stateside, especially in the Northeast, you'll also encounter a language barrier. Actually, the barrier isn't so much one of language as it is of the regional dialect. This is especially true of the historic capital of Massachusetts.

If your vacation itinerary brings you to Boston (pronounced Baw-stin), you will be immediately be besieged with curious spellings and strange pronunciations.

The following was e-mailed to be by my brother-in-law, Don. I wished I'd had this when I first came to Boston forty plus years ago!

For those of you who have never been to "Bawstin", this is a good guideline. I hope you will consider coming to "Beantown" in the near future.

Information on Boston and the Surrounding Area:

There's no school on School Street; No court on Court Street; No dock on Dock Square; No water on Water Street.

Back Bay streets are in alphabetical "oddah": Arlington, Berkeley, Clarendon, Dartmouth, etc. So are South Boston streets: A, B, C, D, etc.

If the streets are named after trees (e.g. Walnut, Chestnut, Cedar), you're on Beacon Hill. If they're named after poets, you're in Wellesley.
Massachusetts Avenue is Mass Ave; Commonwealth Avenue is Comm Ave; Dorchester Avenue is Dot Ave.

South Boston is Southie.
The South End is the northwest of South Boston.
East Boston is Eastie.
The North End is east of the West End.
The West End is no more; (a guy named Rappaport got rid of it one night.)
Scollay Square is Government Center.
Roxbury is The Berry.
Jamaica Plain is J.P.

How to say these Massachusetts city names correctly:
(Say them wrong and be shunned)

Definitions:
Frappes have ice cream, milkshakes don't.
If it is fizzy and flavored, it's tonic.
Soda is CLUB SODA.
"Pop" is DAD.
When we want Tonic WATER, we will ask for TONIC WATAH.
The smallest beer is a pint.
Scrod is whatever they tell you it is, usually fish. If you paid more than $7/pound you got scrod.
The underground train is not a subway. It's the "T", and it doesn't run all night (fah chrysakes, this ain't Noo Yawk).
Order the "cold tea" in China Town after 2:00 am you'll get a kettle full of beer.

It's not a water fountain; it's a bubblah.
It's not a trashcan; it's a barrel.
It's not a spucky, a hero or grinder,... it's a sub.
It's not a shopping cart; it's a carriage.
It's not a purse; it's a pockabook.
They're not franks; they're haht dahgs. ( Franks are money in Switzahland).

Police don't drive patrol units or black and whites, they drive a "crooza".
If you take the bus, your on the "looza crooza".
It's not a rubber band, it's an elastic.
It's not a traffic circle, it's a rotary.

Things Not to Do
Don't pahk your cah in Hahvid Yahd .. they'll tow it to Meffa (Medford) or Summahville (Somerville) .
Don't sleep on the Common. (Boston Common)
Don't wear Orange in Southie on St. Patrick's Day.

Things You Should Know:

There are two State Houses, two city Halls, two courthouses, two Hancock buildings (one old, one new for each).

The colored lights on top the old Hancock tell the weatha':
"Solid blue, clear view...."
"Flashing blue, clouds due...."
"Solid red, rain ahead...."
"Flashing red, snow instead...." ( except in summer when flashing red means the Red Sox game was rained out)

Most people live here all their life and still don't know what the hell is going on with this one:

After studying the above and committing it to memory, you are ready to undertake the adventure of "tourist-ing" in Boston. If you are staying more than a week - you're on your own.

Worked with a guy many years ago that was born and raised in Boston. It was very difficult to talk with him for a very long time. I finally managed, but it wasn't easy. I think I'll just stay here in this part of the country.

so of this woudl have been useful when i satrted coming up every spring 3 years ago. but hey, now i am comfortable taking the T thru the berry. yes, i am.

It took me awhile to deal with vernacular and where to pahk my cah when I went near Hahvad Yahd.

If you are comfortable riding the T through the Berry that's half the battle. I take it you have friends and/or family who live there.