I'm a Veteran and Proud of It ! 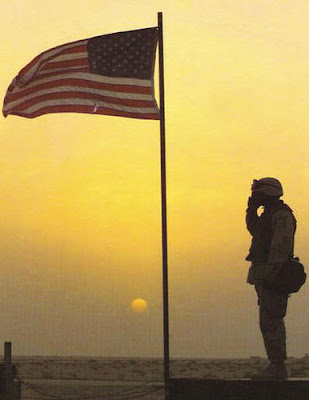 "Oh say does that star-spangled banner yet wave ..."

Say, what happened to all of those flags anyway? I'm talking about those flags that in the immediate aftermath of Sept. 11, 2001, could be seen prominently displayed almost everywhere you looked.

Has patriotism become outdated? Is it out of vogue to pay tribute to those who have fallen to keep us free?

Veterans Day, 11/11/2009:
I looked for flags today. I was dismayed when I realized my search was virtually a scavenger hunt. Oh, I saw some U.S. flags. They could be seen on poles above schools, city halls, post offices and other government buildings, but scarce were those displayed at private homes.

I'm won't extol the virtues of being patriotic; freedom assures all of us the right to express patriotism in our own ways, whether within our hearts or by wearing it on our sleeves. 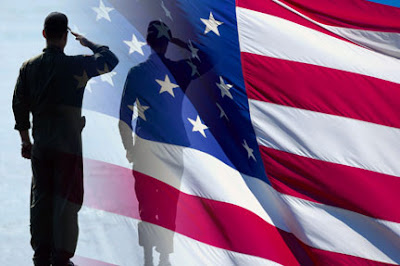 I've posted the following quotes because they express what it means to be patriotic far more eloquently that I can ever hope to:

Off with your hat, as the flag goes by!
And let the heart have its say;
you're man enough for a tear in your eye
that you will not wipe away.
~Henry Cuyler Bunner

And I'm proud to be an American,
where at least I know I'm free.
And I won't forget the men who died,
who gave that right to me.
~Lee Greenwood

If you are ashamed to stand by your colors, you had better seek another flag.
~Author Unknown

Where liberty dwells, there is my country.
~Benjamin Franklin

Liberty and Union, now and forever, one and inseparable!
~Daniel Webster

I'd like to think that the following quote by Samuel Langhorn Clemens is not an accurate view. Alas, I fear it might be true:

In the beginning of a change, the patriot is a scarce man, brave, hated, and scorned. When his cause succeeds however, the timid join him, for then it costs nothing to be a patriot.
~ Mark Twain

It seems like a distance memory, but once upon a time the kids in a classroom would stand, face the American flag, place their hand over their hearts and recite the following: 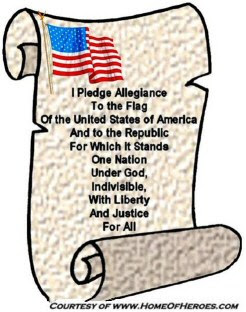 If it were in my power, this practice would be reprised forthwith!

You're a very lucky person to be a citizen of the US. It's a good country even with all it's flaws (no more than any other country, and much less than some). =)

I'm with you here, but you already know that.

Our flag was proudly displayed.

Yes, we are lucky to have been born and live in this great country.

I salute you back.