I Don't Feel Any Older 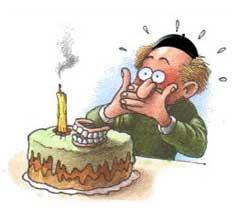 Three score and two years ago ...

... so many candles, the smoke detector went off ... a neighbor called the fire department ... a bunch of kids showed up with marshmallows on sticks ...

Just kidding, none of that happened. There were no special festivities. Essentially it was just another day. 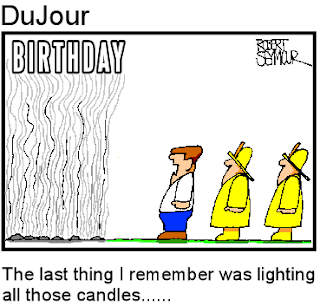 Actually any celebration was put on hold until next Sunday. My daughter and son-in-law want to celebrate my birthday then at their house. Knowing that I've been wanting to see that James Cameron movie, Avatar, they're taking me to see it in 3-D at a nearby iMax theater.

After the movie, we'll return to their home for pizza followed by the lighting of the cake. (One if by land and two if by sea ... or is it the other way around?)

After the big five-oh, I stopped being excited about my birthdays. It was at that point that I knew that I probably had more behind me than ahead of me. 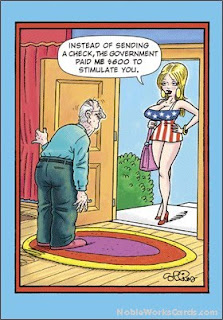 A stimulus gift from the government like the one in the cartoon at the left would have been a nice present.

Of course, I'd have to worry about lighting the candle!

~Sigh~ Putting that list together certainly didn't make me feel any younger!

Truthfully, I don't really feel old as in over-the-hill. ... Then I remember that in three years I will be facing retirement! I plan on it being a long and healthy retirement.

I also plan on continuing to maintain this Blog for a long time to come. So continue to read along and grow older with me.

My husband was born in 1947. I hope you get that kind of government stimulus too.

Belated Happy Birthday, Mike!! I didn't recognize the name when you send a friend request on FB, but now I see my mistake - and I will send one to you! Sorry!

Happy Birthday to you!! I have never commented on here before but I read this blog nearly every day and really enjoy it!

A late Happy Birthday but hoping you had a very wonderful one none the less!

Thank you for the song!

THAT sure is some kind of stimulus package, isn't it?

No problem. We recognize most of the bloggers by their screen names anyway.

Thank you - and yes it was a good birthday.

Thank you. I hope you continue to visit and read - and please feel free to comment-often!