If the 10 Commandments Were Given Today...

According to the Bible, God gave to Moses two stone tablets with the Ten Commandments inscribed upon them. Those commandments were: 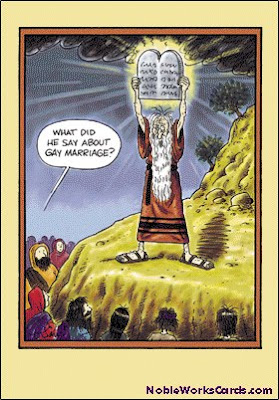 I. Thou shalt have no other gods before Me..."

II. "Thou shalt not make unto God any graven image."

III. "Thou shalt not take the name of God in a vain."

IV. "Remember the Sabbath and keep it holy."

VII. "Thou shalt not commit adultery."

VIII. "Thou shalt not steal."

IX. "Thou shalt not bear false witness against thy neighbor."

X. "Thou shalt not covet thy neighbor's wife."


Nowhere in the Bible is there a transcript of the conversation between God and Moses while a copy of the Commandments were being burned.

If the 10 Commandments were given out today, it would be different. CNN and MSNBC would have reporters and cameras on the scene to record it all.

Quotes of Moses Upon Reading the Laws

"Well, yes, I do have an Egyptian accent, but that's because I was born and raised there."

"These tablets are pretty heavy. Couldn't you have faxed them or something?"

"Any chance these are available in paperback?"

"Hmmm ... We're going to need a Supreme Court to interpret them."

"I'll run it by the others, but it won't be easy to market."

"Surely these aren't intended to apply to politicians too?"

"How long do we have to get in compliance?"

"It's going to take time to get these through the legal department."

"Is this one of David Letterman's Top 10 Lists?"

"Can we make the Sabbath on Saturday so we can play golf on Sundays?"

"Well, okay, but I'll have to hire some enforcers."

"If I'm going to sell this, we'll need some special effects. Can you come up with some thunder and lightning?"

"I'll have to run these by the Rules Committee."

"We were really hoping for something less mean-spirited."

"You're setting me up, aren't you? Am I on Candid Camera or Fear Factor?"

"If I'm not to covet my neighbor's wife, she's going to have to draw the bedroom shades at night!"

"You don't suppose we could become Catholics instead?"

"Say, if you're so omnipresent, why do I have keep climbing up this f**king mountain?"

"And another thing, why did you let us wander in the desert for forty years? If you're so omniscient, you could've shown us a shortcut."

When he descended from the mount bearing the stone tablets, the first thing Moses said to his followers:

"Thou shalt not shoot the messenger."

Yep, that's probably just how it would have happened in today's world. Bwahahahahaha.

Yep. I imagine that environmentalists would have been there to protest the burning bush as it might have been part of the spotted owl's habitat.

You may have hit the nail on the head. snerx.

I suspect that in our modern world that the 10 Commandments may have appeared on a blog.