Incarcerated
The bride tells her husband, "Honey, you know I'm a virgin and I don't know anything about sex. Can you explain it to me first?"

"OK, Sweetheart. Putting it simply, we will call your private place 'the
prison' and call my private thing 'the prisoner'. So what we do is: put the prisoner in the prison.

And then they made love for the first time.

Afterwards, the guy is lying face up on the bed, smiling with satisfaction.

Nudging him, his bride giggles, "Honey the prisoner seems to have escaped."

Turning on his side, he smiles. "Then we will have to re-imprison him."

After the second time they lie spent, the guy reaches for his cigarettes but the girl, thoroughly enjoying the new experience of making love, gives him a suggestive smile, "Honey, the prisoner is out again!"

The man rises to the occasion, but with the unsteady legs of a recently born foal.

Afterwards, he lays back on the bed, totally exhausted.

She nudges him and says, "Honey, the prisoner escaped again."

Limply turning his head, he yells at her, "Hey, it's not a life sentence!"

Death of a Virgin

Two sisters lived together, and one became quite ill. Her doctor told her she had but a short time to live.

She spoke to her sister and said, “Jennie, when I die and you put up a gravestone, I want you to inscribe it just the way I tell you. I want them to put my name on it and underneath: BORN A VIRGIN, LIVED A VIRGIN, DIED A VIRGIN.”

She died shortly thereafter, and Jennie went to the maker of the tombstone and explained what inscription she wanted. The gravestone maker told her that there were simply too many words to be put on the headstone.

Jennie complained that those were her sister’s dying request. The gravestone maker assured her that he would do his best.

After a month the gravestone maker called Jennie and told her the stone was ready, and that he had complied with her dead sister’s wishes as best he could.

Jennie looked at the tombstone and across the top was her sister’s name just as she asked, and underneath was printed: 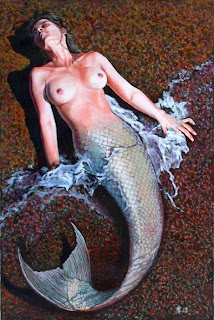 Three fellows walking along the beach noticed a mermaid sitting on a rock swishing her tail in the foam. The first man waded out to her and said, "Hello mermaid! Have you ever been kissed?"

So he kissed her quite thoroughly and asked, "Did you like that?"

The second man went out to her and asked,"Mermaid, have you ever had your breasts fondled?"

"No sir," she replied. So he set to fondling and caressing them and then asked, "How did you like that?"

She replied," It was most pleasurable, sir."

The third fellow approached and asked," Mermaid, have you ever been f**ked?"

He said, "Well you have been now, the tide's gone out!"

First Time (1)
The sky was dark, the moon was high

All alone just she and I.

Her hair was soft, her eyes were blue

I knew just what she wanted to do.

Her skin so soft, her legs so fine

I ran my fingers down her spine.

I didn’t know how, but I tried my best

I started by placing my hands on her breast.

I remember my fear my fast beating heart

But slowly she spread her legs apart

And when I did it I felt no shame.

All at once the white stuff came!

At last it’s finished, it’s all over now

My first time ever at milking a cow….

First Time (2)
Clem drove his pickup alongside the road and showed his buddy Jed where he'd first had sex. "It was right down there by that there tree. I remember it plain as day. It was a warm summer day... We were madly in love... We made our way down to that the tree and made love for hours," explained Clem.

"Yep, it was goin' real well until I looked up and saw her momma standing right there watching us..."

"Damn, what did her momma say when she saw you puttin' it to her daughter?"

She says, "What the hell do you guys think you are doing?"

One of the Japanese men replies, "We are all berry hungry."

The waitress says, "So how is whacking off in this restaurant going to help that situation?"

One of the other businessmen replies, "Because menu say, FIRST COME, FIRST SERVED."

A Riddle
What do you call a 400-pound woman who likes sex with both men and women?

A Bisexual Built For Two

You are incorrigible, aren't you? LOL

If that's a good thing - thanks.

The "first time" is often amusing when looking back on it.