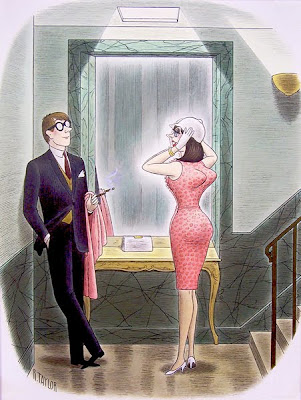 -->
Although his family didn't approve, Jason continued to see Helen because she was fun to dance with."

τhe Original Redneck Love Poem
Susie Lee done fell in love,
She planned to marry Joe.
She was so happy ’bout it all,
She told her Pappy so.

Pappy told her, “Susie gal,
You’ll have to find another.
I’d just as soon yo’ Ma don’t know,
But Joe is yo’ half-brother.”

So Susie put aside her Joe
And planned to marry Will.
But after telling Pappy this,
He said, “There’s trouble still.

“You cannot marry Will, my gal,
And please don’t tell yo’ mother.
But Will and Joe, and several mo’
I know is yo’ half-brother.”

Susie Lee’s po’ heart was broke
From running out of men
She’d hesitate to take a mate
If they were all half-kin.

There was no boy that she could find
Without that fatal flaw.
She had no clue what she could do,
So, Susie told her Ma.

But Ma just laughed and said, “My child,
Just do what makes yo’ happy.
Marry Will or marry Joe…
You ain’t no kin to Pappy.” 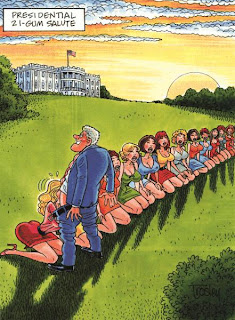 τhe τaxidermist
This guy walks into a bar in Alabama and orders a white wine. Everybody sitting around the bar looks up, surprised, and the bartender looks around and says: "You ain't from around here, are ya... where ya from, boy?"

The bartender asks, "What th' hell you do in Iowa?"

The guy responds, "I'm a taxidermist."

The bartender asks, "A taxidermist... now just what th' hell is a taxidermist?"

The guy says, "I mount animals."

The bartender grins and shouts out to the whole bar, "It's OK boys, he's one of us!"

τhe Insider
A mangy redneck youth walks into the kitchen where his mom is fixing that night's dinner. 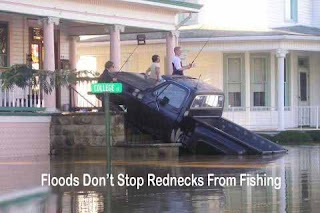 "Mom, I got a splinter in my finger. Can I have a glass of cider?" asks the slack-jawed youth.

"Are you sure you don't want me to pull it out?"

"No thanks, just the cider."

"Well sure," responds the youth's mother and gives her boy the cider and watches him trot contentedly off.

About fifteen minutes later the boy returns to the kitchen and again asks his mother for a glass of cider. His mother, not wanting to question his reasoning, gives him another glass and again watches him leave happy.

Ten minutes later the boy returns once again asks for a glass of cider. The mother complies with her son's wishes again, but her curiosity has been piqued to the point where she can't resist knowing why any longer. So she wanders into the family room and sees her son sitting in front of the TV with his finger in the glass.

"Why on earth do you have your finger in that glass?" asks the boy's mother.

"Well Mom, I heard Sis on the phone say that whenever she had a prick in her hand, she couldn't wait to get it in cider." 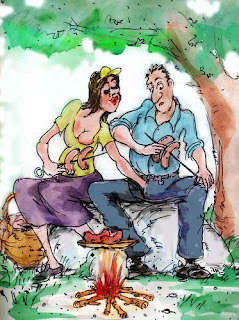 A redneck blonde goes into a store to buy a rod and reel. She doesn't know which one to get so she just grabs one and goes over to the register. There is a "associate" standing there with dark shades on.

She says, "Excuse me sir... can you tell me anything about this rod and reel?"

He says, "Ma'am I'm blind but if you will drop it on the counter I can tell you everything you need to know about it from the sound that it makes."

She says, "Thats amazing that you can tell all that just by the sound of it dropping on the counter. I think it's what I'm looking for so I'll take it."

He walks behind the counter to the register, and in the meantime the woman farts. At first she is embarrassed but then realizes that there is no way he could tell it was her... being blind he wouldn't know that she was the only person around.

τhe Blonde in the Hardware Department
A Blonde called her mom, "Hi Mom, How are you?"

"Hi Sally, where are you? I thought you were with your father at the Ace Hardware"!

"Yeah we were, but I got arrested, and they've let me make one phone call"!

"Oh, I punched this African-American woman in the head."

"Well it wasn't my fault. Dad told me to find a Black & Decker."

I remember this song from WAY back (50s, I think.) I first heard the Kingston Trio version, but as the site shows it was recorded by Trini Lopez and others, including a French version.

("There is nothing new under the sun." -Ecclesiastes)

Thanks for the link to those lyrics.

Wow! This poem I found is far from being original. I don't remember the song back then, but it looks like someone adapted the lyrics and used them for the "Redneck Love Poem."

I was cracking up that one while I was trying to post it.

I see you agree with Sandee.