Newsflash: Prior to this posting an earthquake measuring 6.9 on the richter scale had struck near Taiwan. 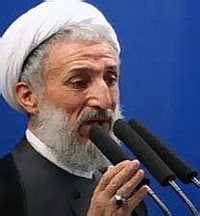 Sheik Your Booby
"Many women who do not dress modestly ... lead young men astray, corrupting their chastity and spread adultery in society, which (consequently) increases earthquakes," Hojatoleslam Kazem Sedighi was quoted last week as saying by Iranian media.

A college student decided to challenge his remarks in her blog, Blag Hag , which in turn created tremors all over the web, including Facebook, when thousands of women exposed their cleavage in defiant protest.

Boobwash! say tens of thousands of women who refuse to believe flaunting their breasts is triggering a world-wide Boobageddon. Led by Purdue University student Jen McCreight they staged a 24-hour protest Monday.

Dubbed Boobquake, McCreight encouraged women around the world to flaunt their breasts and their cleavage to prove the Iranian clerics wrong. She even came up with some cleavage-flaunting T-shirts that she was selling for charity with messages that read: “Boobquake 2010: Who says science has to be boring?” and “Boobquake 2010: Did the Earth move for you?”

From Boobquake on Facebook the results of the Boobquake experiment: So, sorry Sedighi. To quote something that was floating around twitter - women can move mountains, but they don't cause earthquakes. 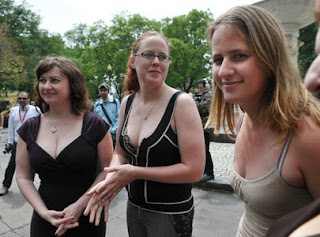 In the photo at right, three women in Washington D.C. show that they have the 'right stuff.'

It took me a little while to cull through the many links and news stories (and photos) to piece together this post. It was a tough job, but someone had to do it.

Surprisingly, there really weren't many interesting pics of those deadly "mounds of doom" out there. I thought maybe some sexy nurses or teachers might have joined the seismic exposure parade. I found a pic of a teacher and a nurse showing some cleavage, but they came from sites completely unrelated to the Boobquake experiment. (Then again, maybe those two aren't really a teacher or a nurse.)

When you get down to it, one can see cleavage anytime and anywhere, well, maybe not in Iran.

I've never felt a tremor, much less an earthquake when viewing a woman's open blouse or vee-neck t-shirt. Oh, I've seen some shaking and jiggling, but I am confident in saying that it was not the result of moving tectonic plates. I never saw a volcanic plume on the horizon either.

I guess the only really danger from exposing cleavage just might be a sudden eruption!

Then again, I've never witnessed an eruption either!

I knew Sedighi would make it all our fault. Just had a feeling.

Sins = Global Disaster. I thought everyone knew that! :o}