This is recycled from the archives with some new entries added into the mix.

eekonomics - n., (eek-uh-nom-iks) the study of dwindling finances during a state of recession; usually accompanied by inconsolable screams.

The current state of the "eek-onomy" has the country in the deepest state of recession since the failure of Reaganomics. Some would even say that we are on the doorstep of a depression. I wouldn't go as far as taking that fatalistic approach, but I have to admit that it is depressing.

You know, the sad state of the "eek-onomy" can be felt by nearly everyone, but not everyone is affected in the same way or to the same degree. Not straying from that topic, I have come to the conclusion that our dictionaries should be updated to reflect the various degrees of "eek-onomic" stresses the populace faces.

I have already taken the liberty to add "eekonomics" and "eekonomy" as more accurate alternatives to the more familiar but now arcane words, 'economics' and 'economy.'

What follows is a list of some other new words and their definitions which are intended to reflect the varying degrees of how Americans are feeling the squeeze.

aerodynomics - n., (arrow-die-nom-iks) when the economy is down but the prices are in the stratosphere.

beakonomics - n.,(beek-uh-nom-iks) unable to afford food as one has been accustomed, hence eating like a bird.

birdienomics - n., (bird-ee-nom-iks) when eekonomy is so bad that a paycheck is better served lining the bird cage.

bleeponomics - n., (bleep-uh-nom-iks) a state when the eekonomy is so bad only expletives deleted can be used to describe it.

custernomics - n., (cuss-ter-nom-iks) when one's back is against the wall, besieged by so many creditors that it feels like the last stand.

DConomics - n., (dee-cee-uh-nom-iks) the Government's spin given on the state of the eekonomy, regardless of the conditions.

fleeconomics - n., (flee-kuh-nom-iks) moving operations to an area where less taxation exists, usually another country where cheap labor can be used (also known as outsourcing).

funnynomics - n., (fun-ee-nom-iks) when the value of the dollar is a near equivalent to that of the play money in a board game.

greekonomics - n., (greek-uh-nom-iks) when the withholding taxes from a paycheck have payees feeling like they have just visited a proctologist. 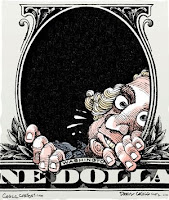 hide-go-seek-onomics - n., (hyde-go-seek-uh-nom-iks)when deep in debt, the practice of not answering telephones, not answering doors and not responding to past-due bills in attempts to avoid creditors.

kittynomics - n., (kit-ee-nom-iks) similar to birdienomics; instead paycheck is shredded for use in cat's litter box.

life-of-riley-nomics - n., (life-uv-rye-lee-nom-iks) known only to those who are so f**king rich, they don't care what the eekonomy is like.

mikeynomics - n., (my-kee-nom-iks) when splurging for a fancy meal consists of Life cereal; you like it, but you can't afford it.

Obamanomics - n., (Oh-bomb-uh-nom-iks) waiting for the definition to be given from the Oval Office at 1600 Pennsylvania Ave. 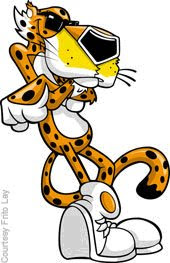 running-on-empty-nomics - n., (ruh-ning-awn-imp-tee-nom-iks) whether food in one's belly or gas in one's tank, you can't seem to get anywhere.

shittynomics - n., (shit-ee-nom-iks) Kind of speaks for itself, doesn't it?

There you have it, a list of new words to describe the many sides of a recession. But wait, the government is still trying to put into effect - social-security-nomics: 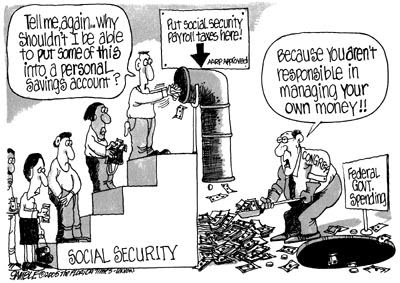 Oh that last cartoon said it all. Isn't it the truth. Love it.

That would be social security-nomics.

eToro is the best forex trading platform for newbie and pro traders.