Wake Up Out There!
Get With The Program!
Have you filled out your Census form and put in the mailbox?

NO? Why The Hell Not?
Don't you realize that there are millions of illegal immigrants depending on you?

A new report by the U.S. Census Bureau that puts the number of "unauthorized and quasi-legal" immigrants in the United States at about 8.7 million - double the previous decade's number - has spurred calls by immigration reform groups for tighter immigration controls.

Wait A Minute!
It's The Illegals Who Aren't Filling Out The Form! 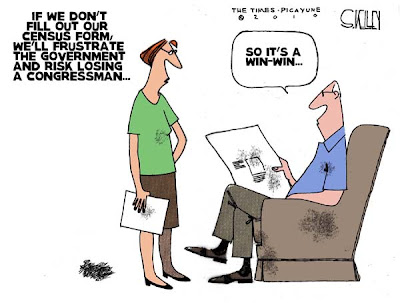 On the local evening news I saw a reporter interviewing people about the 2010 Census form. She was talking to people in an area of a city known to be a haven for illegal aliens. 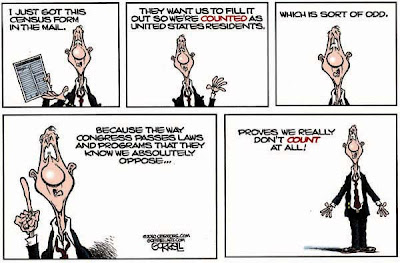 Woman: Let me get this straight, if I fill out the form and say how many people live with me in my house, I can get more money?
Reporter: Well, yes, if you are a citizen and meet the government's requirements.
Woman: No hablas Anglese!

After that woman slammed the door in her face, the reporter next spoke to some of the people on the street. If they spoke to her at all, the questions and answers pretty much went the same way. 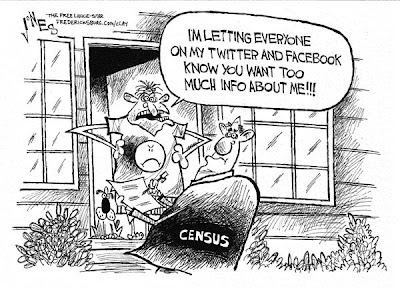 They have become masters of hiding in plain sight! Filling out the Census forms would jeopardize their right to do so. If they'd wanted to be held accountable, they would have remained in their own countries.

Of course, they have aces up their sleeves! Can you say "A.C.L.U."? The Aliens Civil Liberty Union have their backs. Yes, Sharpton and his minions will stand up for them and fight for the rights for which they are not entitled.

They are here (in this country) illegally and we have to accept that fact.

Wake Up Out There!
At least stand up and be counted!
№ 1952
Curmudgeon responsible for this post: Hale McKay at 8:35 PM

Yep, and they just keep coming. Drop the anchor baby and get on welfare. That's the way they get on the dole.

They talk about controlling the influx of illegals - but talk is cheap. It's high time they took some action.