Pretty Good - Not So Good 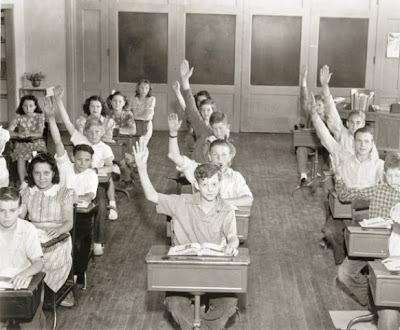 He wasn't terrific at reading,
He wasn't a whiz-bang at math;

But for him education was leading
Straight down a pretty good path.

He didn't find school too exciting,
But he wanted to do pretty well,

And he did have some trouble with writing
And nobody taught him to spell.

When doing arithmetic problems
Pretty good was regarded as fine.

Five plus five needn't always add up to be ten,
A pretty good answer was nine.

And the student was not an exception,
On the contrary, he was the rule.

And nobody seemed to notice
He could not tell a verb from a noun.

And the first time he knew what he lacked was
When he looked for a pretty good job.

It was then, when he sought a position,
He discovered that life could be tough,

And he soon had a sneaky suspicion
Pretty good might not be good enough.

There once was a pretty good nation,
Pretty proud of the greatness it had,

If you want to be great,
Pretty good is, in fact, pretty bad.

... Maybe if they recited the Pledge of Allegiance and prayed...
№ 1958
Curmudgeon responsible for this post: Hale McKay at 12:10 PM

It would be much better than pretty good if we said the Pledge of Allegiance and prayed...