A Rolls Royce pulls up in front of a really expensive restaurant and a really rich sheik gets out from it followed by a harem of women, and a rooster. The "party" is escorted to a table and given a menu.

When summoned again, the waiter asks the sheik about the voracious appetite of the rooster.

The sheik explains: "I was in the desert one day and found a lamp. It was a bit dirty so I rubbed it to clean it. Just as I did, out came a Genie and granted me three wishes... 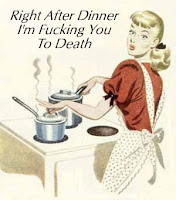 It was many years ago since the embarrassing day when a young woman, with a baby in her arms, entered his butcher shop and confronted him with the news that the baby was his and asked what was he going to do about it? Finally he offered to provide her with free meat until the boy was 16. She agreed.

He had been counting the years off on his calendar, and one day the teenager, who had been collecting the meat each week, came into the shop and said, "I'll be 16 tomorrow."

"I know," said the butcher with a smile, "I've been counting too, tell your mother, when you take this parcel of meat home, that it is the last free meat she'll get, and watch the expression on her face."

When the boy arrived home he told his mother. The woman nodded and said, "Son, go back to the butcher and tell him I have also had free bread, free milk, and free groceries for the last 16 years and watch the expression on his face!" 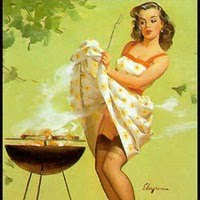 A blind man walks into a restaurant and sits down. The waiter, who is also the owner, walks up to the blind man and hands him a menu. "I'm sorry, sir, but I am blind and can't read the menu. Just bring me a dirty fork from a previous customer. I'll smell it and order from there."

A little confused, the owner walks over to the dirty dish pile and picks up a greasy fork. He returns to the blind man's table and hands it to him. The blind man puts the fork to his nose and takes in a deep breath.
"Ah, yes, that's what I'll have -- meatloaf and mashed potatoes."

Unbelievable, the owner thinks as he walks toward the kitchen. The cook happens to be the owner's wife. He tells her what had just happened. The blind man eats his meal and leaves.

Several days later, the blind man returns and the owner mistakenly brings him a menu again. "Sir, remember me? I'm the blind man."

The owner retrieves a dirty fork and brings it to the blind man. After another deep breath, the blind man says, "That smells great. I'll take the macaroni and cheese with broccoli."

Walking away in disbelief, the owner thinks the blind man is screwing around with him and tells his wife that the next time the blind man comes in, he's going to test him. The blind man eats and leaves.

He returns the following week, but this time the owner sees him coming and runs to the kitchen. He tells his wife, "Sue, rub this fork on your panties before I take it to the blind man."

Sue complies and hands her husband the fork. As the blind man walks in and sits down, the owner is ready and waiting. "Good afternoon, sir, this time I remembered you and I already have the fork ready for you."

The blind man puts the fork to his nose, takes a deep whiff, and says, "Hey I didn't know that Sue worked here..."

While tending to her housework, a woman asks her husband, "Will you please fix the cabinet in the kitchen? It's been barely holding on to it's hinges for weeks now."

He replies "Does it say 'carpenter' on my forehead?"

Surprised, she lets it go and returns to her housework. As she begins to clean the bathroom, she notices that the lever is getting stuck. She yells from the bathroom,

"Honey, the toilet's lever is stuck again! Can you fix it?"

She comes into the living room to find him reading the paper. He responds to the puzzled look on her face with... "Do I have "plumber" written on my forehead?"

The next day, her husband comes home from work to find the Cabinet fixed, the toilet fixed, and a chipper spouse making the bed in the master bedroom.

"A kind young gentleman came by today, said he was a handyman and asked if I needed anything done around the house. When he finished, he said I couldn't pay him with cash because I don't keep it around the house. He mentioned that was fine and that I could pay him by having sex with him or cooking him a good meal."

"What did you cook for him?"

I stole the free meat one. Bwahahahahahaha. I gave you credit of course. :)

As always - steal away.

Awesome stuff! Brought a lot of smile to my face today.

Thanks for the visit and for commenting.

I'm going to check out your site.

It's been said that any bettor needs to see this,

Watch this or stop betting on sports...