Hu's On First This Time?

Back on April 21, 2006, I posted Hu's On First? It was a parody of the famous Abbott & Costello routine, 'Who's On First?' That was four years and one President ago. The times have changed [sic] and there's a new man in town. That meant that an update was in order.
Washington, D.C. - Tensions are high at the White House as President Barack Obama prepares for a private Oval Office meeting with Hu Jintao, the President of the Peoples Republic of China.
There is knock at the doors to the Oval Office. The receptionist opens the door and peeks in.

Obama: Whoa! You didn't use the secret password.
Recept: Sorry, sir. It's CHANGE.

Obama: No! Didn't you read the memo? We scrapped that one. It got me elected, but the voters got wise that it was just an empty campaign slogan.
Recept: Oh dear, it's on my desk. I guess I forgot to read it.

Obama: Then, I suggest you go read it.
The receptionist excuses herself and returns five minutes later. Once again she knocks on the door and peeks in.
Recept: Excuse me, Mr. President ...

Obama: Come on, my handwriting isn't that bad!
Recept: No, sir!

Obama: Then, what's the problem?
Recept: Well, sir ... It's written in Arabic!

Obama: Oh, heh-heh. I've been practicing writing the folks back at the homestead.
The President hastily scribbles something on a Post-It pad and hands it to the receptionist. He summarily grabs from her hand the memo she couldn't read. She leaves the Oval Office to read the note. For the third time she knocks on the door and peeks in.
Obama: Yes?
Recept: The pass word is 'SAME OLD, SAME OLD.'

Obama: Why yes, I am listening to Dolly Parton on my Blackberry.
Recept:  She is a big star ...
Obama:  Big?  She's humungous!

Obama:  Excellent, who is it?
Recept: Yes.

Obama:  Why can't you just tell me who's out there?
Recept: That's what I've been trying to tell you, Mr. President.

Obama: You've been trying to tell me who's out there?
Recept: Yes, I have.

Obama: You! Is there anyone else here?
Recept: No, Sir. He's alone.

Obama: Who is alone?
Recept: Yes, sir. There's no one with him.

Obama: There's no one with who?
Recept: Whom, Sir.


It is at this point that both the President and the receptionist are beginning to show signs of mutual frustration. The Commander-in-Chief sits up straight in his chair and lights up two cigarettes at the same time. He decides to try another approach.
Obama:  You are my personal receptionist and secretary.  Part of your job is to keep me apprised of my appointments.  Correct?
Recept:  Yes, Mr. President, sir.  It is my job to stay abreast of your busy schedule.
Obama: Let's leave Dolly Parton and her attributes out of the discussion, please.
Recept:  As you wish, sir.
Obama:  You keep a calendar that lists my appointments?
Recept:  Of course.


Obama: Tell me, what's on the list for the name of my first appointment?
Recept: Oh no, Sir. Watson's the second appointment.

Obama: Why are you bringing up the second appointment?
Recept: You mentioned his name, Mr. President.

Obama: I mentioned whose name?
Recept: No Sir.


Obama: (Blank Stare) Look, you have a list of names there of my appointments for the day ... Right?
Recept: Yes, of course, Mr. President.
Obama: Now, if I were to tell you to send in the first person on that list, who would come in first?
Recept:  That's correct.

Obama: So, what's on the list for his name?
Recept: Watson's on second. Hu's on first. 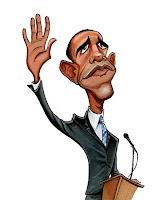 Obama: Let's try something else. Most people come here to my office looking for funds. Am I right?
Recept: That's right, Mr. President.

Obama: Let's suppose that my 10 o'clock appointment out there in the lobby enters into my office and convinces me to allocate him funds. I will make the check payable to ... Who?
Recept: Yes.
Obama: I mean, who gets the money?
Recept: Correct, Sir ... Every dollar!


Obama: Why at this time everyday, do I get a headache?
Recept: Wyatt is the third, Mr. President.

Obama:  Huh? We're on the third appointment now? I still haven't the seen the first one. What's on the list for them?
Recept: No, Watson's on second.

Obama: How come you're talking about the second one again?
Recept: You said his name again.

Obama: Who's name?
Recept: No, not his name. Watson's name.

Obama: I don't know what the fuck I'm talking about!
Recept: Oh no, he's not here until tomorrow!

This is just how it goes too. Every single day. Just this organized. Just this efficient. Bwahahahaha. Wait, why am I laughing.

You've still got IT Mike.

So you're saying that this might NOT be a parody?

Thank you, Mate. It's good to see that you are still going strong.