The Case of the Raucous Redneck 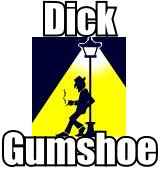 (From the files of Dick Gumshoe, PI - Case № 5)
It had been a day just like every other day that month - no calls, no work, no money and another pile of bills. It isn't easy being a (blog) world famous detective, especially when one resembles a hybrid of Inspector Clouseau, Colombo, and Monk all rolled into one.
I hadn't made many friends since I'd taken up a career as a P.I., but I'd certainly made quite a few enemies. Many times I'd had to rely on my quick wits and guile to survive.
When I heard the first footfall upon the bottom step of the staircase leading to my office door, I used my cat-like prowess to quickly douse the lights and to dive under my desk. While Sherlock Holmes may have had to match wits with Professor Moriarty, I was tormented by my own arch-nemesis, one Harold Abernathy - my landlord.

Besides bumping my head on the desk, my actions did help me solve a couple of mysteries. I found the source of the fruit flies and my missing piece of pepperoni pizza. I decided to let the fruit flies have it.

When my caller rapped on the door I bumped my head again. Somehow, I managed to keep my stream of uttered profanities at a barely perceptible level, or so I thought.

"Mr. 'tective, I knows you in there. I heared you a-cussin'," boomed a voice with an unmistakable southern drawl.

I crawled out from under the desk and scrambled into my chair and said, "Come in."

The door swung open and there stood a lanky man wearing a sleeveless t-shirt and dungarees. The clodhoppers on his feet pounded the floor with each step he took into the office.

He looked around and said, "I reckon so. I didn't see her."

Confused by his reply, I asked, "You didn't see who?"

I took a deep exasperated breath and exhaled as I spoke, "You seem to have me at a disadvantage. Just what did come you here for?"

"I came here fer you to help me find my girlfriend's pussy," he replied.

I leaned forward and rested my chin on my fist. This had to be some kind of joke. Somebody must have sent this redneck to my office to drive me crazy. Since I didn't have anything better to do, I decided to play along for a while.

I grinned and said, "Did you try looking under her skirt?"

"Why would I look under her skirt?" he said with a deadpan but serious glare.

"Well," I began, "it's been my experience that that's the first place I would look for one."

"Lawd a'mighty," he snapped. "How in the hell did you gets to be a 'tective anyway? Where I comes from, iffin you wuz to be lookin' under gals' skirts you would get the piss slapped outta ya! And I knows that fer a fact, coz that's been my 'sperience."

I thought to myself, 'I hope they broke the mold after they made this rube.' I grabbed my pen and a pad of paper to take some notes and asked, "Have you ever had trouble finding ... it before."

This was too much. I leaned back in my chair and decided to see what else he had to say. "Before we go any farther, I need some information for my files. We'll start with your name. You are ... Mister ...?" I noticed that his lip began to curl into a sneer. Then it came to me. "Ah, yes, we've already determined that you missed her, didn't we? Uh, tell me, what is your name?"

"Okay, Mr. Clyde, besides when you weren't trying to sleep, when was the last time you saw your girlfriend's ... ah ... pussy?"

"Jest 'bout ten minutes a-fore I came to see you."

"Where were you at the time?"

"We wuz down yonder next to that fountain with the statue of some nekkid gal innit."

"I know the one. Let me guess, while she was looking at the statue you were looking at it?"

I raised my eyebrows. "You had your hand on it in a public place? Weren't there any people around?"

"Hell, yes. But theys wuzn't payin' no never mind to us. Anyways, she wanted me to wash it. Tha's whut I wuz doin', a-washin' it."

I shook my head. Whoever put him up to this joke must have known I'd get a rise out of it. I cleared my throat, "Okay, you were washing your girlfriend's pussy in a public water fountain ... May I ask, why?"

"Coz she done up and got paint on it."

My jaw almost hit the top of the desk. I was almost afraid to ask, "Paint? How did she get paint on ... it?"

"From a-sittin' on a park bench what had a sign what said 'Wet Paint' onnit." Before I could ask he added, "My girlfriend ain't none too bright like me. She wanted to see jest how wet the paint might be."

"I see. She must have got paint on her skirt too?"

"Nah, it was a new skirt handed down from her sister. She hiked it up so's not to get paint on the skirt jest in case the paint wuzn't dry."

"I got it. That's how it come to have paint on it, and that's why you were washing it, to get the paint off of it. So tell me, how is it that you lost it?" This I have just got to hear, I thought to myself.

"Well sir, with it all wet and lathered up with soap, it got too slippery. I lost my grip on it."

I scribbled a few words on the pad and thought of something. I had to ask, "Tell me, Mister Clyde, can you describe your girlfriend's pussy for me?"

"Well, I reckon it ain't no different than a lot of them. It has short black hair and don't smell none too good. Oh yeah, it's still got some green paint offin that bench onnit."

I jumped when suddenly I heard "Dueling Banjos" from the movie Deliverance playing. As for Cletis Clyde, he calmly removed a cell phone from his pocket. "It's my girlfriend a-callin' me," he said. "Hello, hunny-bunches. Wha's that? Tha's awful! I'll be right there!"

"Something wrong? Another crisis?" I asked.

"I'll say! She said they's some man's wiener stuck in her pussy!" He pulled a dollar bill out of his pocket and dropped it on the desk. "I wants to thank ya fer yer time. I hope that there covers yer bill."

I just sat there dumbfounded as the door slammed behind him. I was almost tempted to follow him, but gave it a second thought and quickly dismissed it.

Suddenly the door swung open and there stood a woman in nightie. She was hysterical and crying, "Can you help me?"

"My husband's wiener is missing!"

I could feel a migraine coming. I had to ask, "It isn't in his pants?"

"What are you, some kind of pervert?" she snapped.

Next thing I knew Cletis Clyde came barging through the door. Under his arm he was carrying a black cat with green paint on its fur. In his hand he was holding a wiener ... a hot dog.

I shook my head and grinned. This case was just about to be solved.

Cletis offered the wiener to the woman and said, "I believe this wiener belongs to your husband. It was stuck in my girlfriend's pussy. Poor thang, it almost choked to death. I think the cat stole it from yer grill on yer porch."

"Keep it, you moron." Disgusted the woman charged from my office without another word.

The redneck shook his head and said, "She ain't none too grateful, is she?"

I smiled and said, "It's a good thing you were able to pull that wiener out of the cat's mouth."

"Pull it out? Nope. It wuz too far down the cat's throat to reach. "I had to perform the hindlick maneuver."

"You mean the Heimlich Maneuver," I said correcting him.

"Uh-uh. Hindlick. I lifted its tail and licked its hind side. That wiener shout outta there like a bullet."

I sighed, "Well, I guess you can say that everything came out alright."

He looked at me and said, "Mister, you Yankees sure got funny ways a-sayin' things. Y'all should be learnin' to talk straight and say what ya mean like we do down in Wes' Virginnie." He took a bite of the hot dog, waved and turned for the door.

He stopped by the door and said, "Ya know, I coulda used yer services las' week. My maw's tits went a-missin' fer a spell." Before I could respond, he grinned and added, "No, I didn't have to look under her blouse. After a hour or so, dem birds came back."

I leaned back in my chair and put my feet on the desk. I decided I'd write up the case later. I looked at the dollar bill he'd left on the desk and pulled 79 cents out of my pocket. The day wasn't a total loss, I thought. At least with $1.79 ... I could buy myself a cup of coffee.
№ 2044
Curmudgeon responsible for this post: Hale McKay at 8:00 PM

I don't who the biggest loser is, Cletis or the detective.

Whatever, this was one funny story.