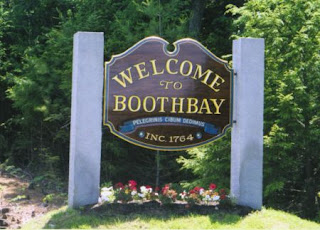 I liked this sign marking entry into the town of Boothbay, Maine.  The Latin motto - Pelegrinis Cibum Dedimus, which translates to "We fed the Pilgrims" appears below the town name.

As you drive around the areas of the towns which surround the Boothbay Harbor area, practically every sign bears the words 'bay' or 'cove' as part of name of those areas. Because of the jagged coastline, one place of interest, which as the crow flies might be two miles, turns into a trip of seven to eight miles by car. That's okay, as those drives yield spectacular views and interesting sights.
The town of Westport occupies an entire island, we had decided to forgo the ubiquitous seafood fare in favor of a steak lunch. We were surprised to learn that there were no restaurants in Westport. From there we drove to the town of Damariscotta. 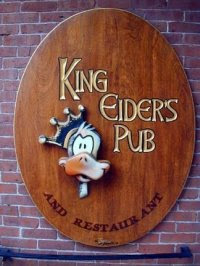 The name of the place and its sign said, "Come on in." King Eider's Pub is my kind of place. I had my steak and my wife went for the crab cakes. In a word - Excellent!

Tomorrow afternoon we will be leaving and heading for home. On our way back, we will again pass through Wiscasset. Per the suggestion of FB friend, Andrea, we will check out that town. Suggestions from the locals have us leaning to one of two eateries there: (1)Red's Eats or (2)Sarah's Cafe & Twin Schooner Pub.

We'll be back home Thursday evening, well before the arrival of "Hurricane Earl" on Friday evening. It appears that we will get a lot of rain and some high winds. Will have to check the batteries in the flashlights and radios in case we lose electricity. (With a little luck, the storm will track farther to the east than they are projecting at present.)

Now that I've bored you with our vacation adventures, I've put together a handful of jokes from the e-mail that has poured in over the last three or four days. 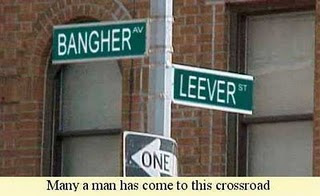 Once upon a time a guy asked a girl: "Will you marry me?"

So the guy lived happily ever after and rode motor cycles and went fishing and hunting and played golf a lot and drank beer and scotch and left the toilet seat up and farted whenever he wanted.

The developers are hailing this as a major social breakthrough, because woman are always complaining about men staring at their breasts and not listening to them.

The clerk pulls up a file ad says, "The job entails getting ladies ready for the gynecologist. You have to help them out of their underwear, lay them down and carefully wash their private regions, then apply shaving foam and gently shave off any hair, then rub in soothing oils so they're ready for the gynecologist's examination. There's an annual salary of $55 thousand, but you're going to have to go to Charlotte, North Carolina. That's about 250 miles from here."

"Oh, is that where the job is?" the young man asks.

"No, sir: that's where the end of the line is right now."


Is it just me, or does anyone else find it amazing that during the Mad Cow epidemic our government could track a single cow, born in Canada, almost three years ago, right to the stall where she slept in the State of Washington? And they tracked her calves to their stalls.

But they have all kinds of trouble locating 11 million illegal aliens wandering around our country. Maybe we should give each of them a cow. 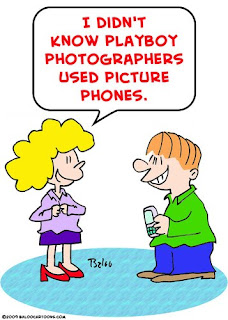 Shopping in a local grocery store, two nuns happened to pass by the beer, wine, and liquor section. One asked the other if she would like a beer.

The second nun answered that, indeed, it would be very nice to have a beer, but that she would feel uncomfortable about purchasing it.

The first nun replied that she would handle that without a problem. She picked up a six-pack and took it to the cashier.

The cashier had an obviously surprised look, so the nun said, "This is for washing our hair".

Without blinking an eye, the cashier reached under the counter and put a package of pretzel sticks in the bag with the beer. He said, "The curlers are on me."
№ 2033
Curmudgeon responsible for this post: Hale McKay at 6:06 PM

Darn WiFi connection up here - it took me three tries to get this posted. The signal kept coming and going ...

I'm going to have to steal some of those jokes. Just saying.

As always - steal away!