I borrowed the following from one of my clients. It was sent to her by a relative. I scanned the two photos and then typed the content of the letter so it could be posted here.

It's a cute story that should bring a smile to your face.


Chippy and the Bologna Sandwich
I wanted to share the following short story and pictures with you ... because I hear you too are a cat lover.

I took Chippy, a black and white Manx, into my home in her golden years. My sister was unable to keep her due to her son's increasingly serious allergies. She needed to find a home for her quickly, and becoming an outdoor cat was not an option for Chippy.

I had one cat already and Velcro wasn't at all thrilled that i was opening my door to another cat. She ruled the house by herself ... and that's the way she liked it.

Velcro actually grew to accept Chippy after giving her the cold shoulder for the first few months.

Chippy was such a sweet cat and a very gentle soul. She was so timid that if she heard a noise ... she froze in her tracks. It made catching her in the act that much funnier.

I was sitting at the table watching TV and making myself a bologna sandwich when I noticed movement out of the corner of my eye. I looked down and saw a white paw sticking through a narrow opening where my table and counter met.

Chippy had quietly positioned herself on a bar stool under the counter and couldn't see me. I think she thought I couldn't see her either.

She just kept sweeping her paw back and forth trying to get a hold of my sandwich. Luckily, I had a disposable camera close by with two pictures left.

You can see the determination on her face once she hooked her claw into the sandwich and she moved her face closer to the opening so she didn't lose sight of the prize.

If only I had a third picture left in the camera I would have captured her taking a nibble out of the bologna sandwich as she triumphantly pulled it right into her mouth.

Bologna isn't exactly good for cats, but i didn't have the heart to take it away without letting her have a couple of bites of the victory sandwich.

These pictures are a few years old and I still laugh every time I see them. I hope you enjoy them too.

I have two sisters who are nurses. They each keep copies of these pictures with them at work to share with their patients who are away from home and missing their own pets.

Chippy would be so proud if she knew how many people have gotten a chuckle from her photos.

I believe I may have captured the only bold thing she ever did. 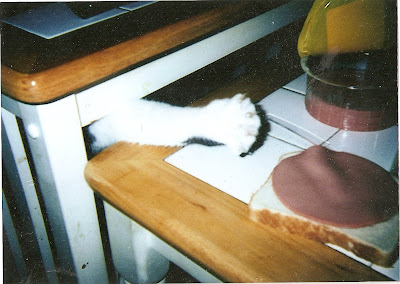 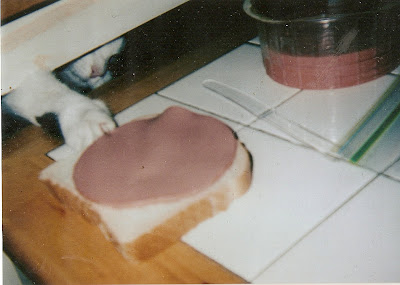 Such a cute story. I love animals, and cats by nature are sneaky,cunning and graceful. The feline family are beautifull graceful animals. They never, well almost never, fail to bring a smile to our faces :) Cathy

I think only people who like and own cats can really appreciate the story.

That was one determined cat. How adorable. Thanks for making me smile.

Cats have a way of bring a smile to us all.