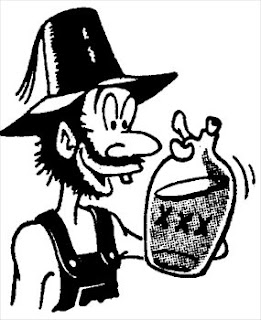 There seemed to have been a hitch in my computer's giddyap the past week or so. After running several anti-spyware programs, it appears that she is running up to snuff again.

So I decided to gather up a few bits about moonshine, the official beverage of Appalachia, to announce that I should be getting back to a normal routine of posting.

The next installment of the current running short story, Butterfly Dreams should appear on Friday, 10/22.

A young man was hitchhiking down south and a farmer driving an old pickup truck stopped to give him a lift.

As they were driving, the farmer started bragging about how good the local moonshine whiskey was. The young man told the farmer that he didn’t drink very much, and that moonshine would probably be too strong for his tastes.

“Nonsense!” said the farmer. “You gotta try some.” He fished around behind him and finally produced a small jug. “Here,” he said, handing the jar to the lad. “Take a drink!”

The farmer wasn’t going to take no for an answer. He stopped the truck and grabbed his shotgun from the rack in back. He pointed the gun at the lad and roared, “I said, take a drink!”

“Okay! Okay!” said the young man. He took a few swallows and instantly realized just how powerful the stuff was. His throat muscles tightened, his eyes watered, and he made a choking sound.

“Yeah,” gasped the lad, afraid he would be forced to drink more if he disagreed, “I guess so.”

Then the farmer handed the young man the shotgun and grinned. “Here! Now, you hold the gun on me and make me drink some!”.

The old man says, "Well, one time my favorite sheep got lost, so me and my neighbors got some moonshine and went looking for it. We looked and looked and finally found the sheep. Then we drank the moonshine and one by one, started shagging the sheep. It was a lot of fun!"

The reporter figured he can't write an article about that, so he asked the old man to tell him another story.

The reporter, feeling frustrated, finally told the old man that he couldn't write articles about those stories and asked him if he had any dramatic or sad memories that he could talk about.

The old man paused a little and with a sad expression on his face said -"Well, one time it was me who was lost . . . "

"Can't you see, Ben," intoned the parson, "that not one good thing comes out of this drinking?"

"Well, I sort of disagree there," replied the backslider. "It makes me miss the folks I shoot at."

“Nope. But a bunch of mice from his place came over here this morning and beat the shit out of our cats.”

Have a terrific day and I'm glad you got your computer working properly again. :)

Heh-heh - that was the funniest one of the lot.

My fingers are crossed for continued smooth running of the puter.

Just searching for funny creatures on google and got your blog post, and really love to read this, that was really funny and of course looking more from you.