When we heard those 1964 lyrics by Ronnie and the Daytonas, there was no doubt that it was a musical tribute to the quintessential muscle car of the 60s. (Both Jan & Dean and the Beachboys covered the song with their own versions.)

Perhaps you might remember that the GTO was mentioned in the lyrics of a hugely popular hit song by the Ramones.

Well the girls out there knock me out, you know,
Rock, rock, rock'n'roll high school,
Cruisin' around in my GTO.

Those of us who had the pleasure of driving one of these machines were saddened to hear the announcement that General Motors has ceased production of its Pontiac Division. Because of the state of the economy, it was inevitable following the same fate of Oldsmobile several years earlier.

A friend of mine owned a red 1966 GTO like the one pictured below. He didn't want anyone even breathing on it, but he did let me drive it a couple of times - on a parking lot. Sitting behind the wheel of that car you could feel its unbridled power.

It wasn't the only muscle car of its era, competing with the Oldsmobile 442, the Buick Wildcat, Plymouth Road Runner, just to name a few, but it was by far the most popular. I wonder how many remember that 'GTO' was an acronym for the Italian phrase, Gran Turismo Omologato, which translated into English was 'Ready To Race.'


Alas, the closing down of Pontiac also brings to mind a muscle car of the 70s and 80s, the Firebird, and its muscle model, the Trans Am. 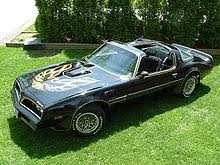 The Trans Am also made it to the small screen in the 80s. KITT, the automotive star of Knight Rider was a modified 3rd generation of the Grand Am.

A victim of environmental concerns, the era of the muscle cars is long gone. It's sad to see these icons of that bygone era reduced to museums and fading memories. Luckily, there are collectors and enthusiasts who continue to keep these machines running.

If you see one on the roads, remember you're looking at a beloved piece of history.

I love all these old cars too. They are part of our growing up years. I think the tree huggers go way too far if you ask me.

I owned a 1969 Road Runner and raced a few GTO's. Some I won,some I lost.Both were great cars. Ahh,the good old days!