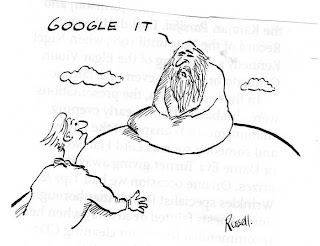 Why Not?
I knew I didn't have to climb to the tip of some precipitous mountain top to have some so-called wise man to tell me to "Google it."

Besides, I must call to question just how "wise" someone might be to sit on top of a mountain.

Yet, it seemed like a ludicrous idea for me to Google something I already knew and didn't really need to actually look up. I mean, how much can I learn from a web search about "IT" that I don't already know?

Frankly, there hasn't exactly been a plethora of ideas popping into my head as of late to be used as subject matter for a post. Perhaps retirement and a more leisurely lifestyle has turned the creative juices into a viscous syrup. I suppose that with all the free time on my hands that maybe ... I've lost it.

To be perfectly honest, I have also been distracted involved with my writings. I've been aspiring to put together a collection of my short stories and to then submit them for publication as an anthology.

Ah, but word count = pages! Some of my stories are lengthy and probably exceed in the number of words what many would consider "short" stories. It would probably be more correct to call them novellas.

As such, I have decided that two of those stories, the currently serialized Butterfly Dreams and its prequel, The Strange Story of Mr. Black and Ms Gray will be combined into one novel.

A funny thing keeps happening on the way to the computer - I keep getting ideas, not for blog posts, but for MORE story ideas! I've been jotting them down lest I forget them and they are gone forever. So, I've been drafting up a few synopses of these ideas, even giving them working titles like: Eco-Nauts, The God Stone, La Boutique Barbie, Blood Blog, etc., to name a few.

I suspect that once I get into the publishing process and start putting some of those story ideas together, my actual blog entries will continue to decrease even more than as of late.

I'll take a guess and say that the following, not necessarily in the same order, will appear when I google "it."

it - a pronoun, a specific object or thing

It. - abbreviation of Italy a Mediterranean country

It. - abbreviation for Italian, the people of Italy, also for the cuisine of that country

it - abbreviation for italics, a type of script or font


What Google Gave
IT - Information technology (IT) is the acquisition, processing, storage and dissemination of vocal, pictorial, textual and numerical information by a microelectronics-based combination of computing and telecommunications.


1.
(used to represent an inanimate thing understood, previously mentioned, about to be mentioned, or present in the immediate context): It has whitewall tires and red upholstery. you can't tell a book by its cover.
2.
(used to represent a person or animal understood, previously mentioned, or about to be mentioned whose gender is unknown or disregarded): It was the largest ever caught off the Florida coast. who was it? It was John. The horse had its saddle on.
3.
(used to represent a group understood or previously mentioned): The judge told the jury it must decide two issues.
4.
(used to represent a concept or abstract idea understood or previously stated): It all started with Adam and Eve. He has been taught to believe it all his life.
5.
(used to represent an action or activity understood, previously mentioned, or about to be mentioned): Since you don't like it, you don't have to go skiing.
6.
(used as the impersonal subject of the verb to be, especially to refer to time, distance, or the weather): It is six o'clock. It is five miles to town. It was foggy.
7.
(used in statements expressing an action, condition, fact, circumstance, or situation without reference to an agent): If it weren't for Edna, I wouldn't go.
8.
(used in referring to something as the origin or cause of pain, pleasure, etc.): Where does it hurt? It looks bad for the candidate.
9.
(used in referring to a source not specifically named or described): It is said that love is blind.
10.
(used in referring to the general state of affairs; circumstances, fate, or life in general): How's it going with you?
11.
(used as an anticipatory subject or object to make a sentence more eloquent or suspenseful or to shift emphasis): It is necessary that you do your duty. It was a gun that he was carrying.
12.
Informal . (used instead of the pronoun its before a gerund): It having rained for only one hour didn't help the crops.
–noun
13.
(in children's games) the player called upon to perform some task, as, in tag, the one who must catch the other players.
14.
Slang .
a.
sex appeal.
b.
sexual intercourse.
—Idioms
15.
get with it, Slang . to become active or interested: He was warned to get with it or resign.
16.
have it, Informal .
a.
to love someone: She really has it bad for him.
b.
to possess the requisite abilities for something; be talented, adept, or proficient: In this business you either have it or you don't.
17.
with it, Slang .
a.
aware of the latest fads, fashions, etc.; up-to-date.
b.
attentive or alert: I'm just not with it early in the morning.
c.
understanding or appreciative of something, as jazz.
d.
Carnival Slang . being a member of the carnival.

There you have it! Everything you need to know about it. No sh-it!

All the things you wanted to know but were afraid to ask.

I know how you feel about the dearth of ideas to cause one to put fingers to keyboard.

I may not have mentioned this before, but the word count for essays is around 750. A friend who is a published author: Mark Hood, "Live before you die", gave me that information. It was my guide for my yet to be published book: "Things I've stumbled across along the way".

I am eager to learn of your progress in this venture. However, I think the Michael/Michelle stories should remain separate. Just my thought. "Butterfly Dreams" is a rather lengthy story. They both can stand on their own in my humble opinion.

Mike, go Kindle. Go man go. However, you know that reviews don't show up sometimes. Still looking for yours, unless you decided you didn't want to write one. No problem. Go Kindle.

I figured it save you some time ...

I agree with what you say about the length of the two stories.

At this point in time, "Strange Story" is actually the longer of the two (60 installments.)

"Dreams" will fall at just about the same number.

Combined on the Word program, the two stories equate to a little over two hundred pages. Together they would be just about the size of a lot of books.

The main title would be "Butterfly Dreams."

Together they are essentially one story.

Thank you. It's something I've been forward to for some time.

Your advice re: Kindle is under advisement. (I was looking at Lulu.)

Will try the review again.