He Said, She Said


Opposites attract - that's what makes the world go around!

You just have to hope that there is some compatibility between the two to make it all work.

It's true, whether you're talking about the geophysical forces of gravity and planetary orbits or the more complicated relationships between men and women.

Yes, understanding the workings of the universe has proven to be less elusive than trying to figure out the age-old battle of the sexes and putting into perspective of who is right and who is wrong. Whether from Mars or Venus, it all comes down to who said what ...


He Said, She Said: Out of Options
HE: Hey, hows about a little action, honey?

SHE: Not tonight. It's that time of the month. Sorry.

SHE: Oh, no! My wisdom tooth is acting up.

HE: (Sigh!) Hows about reaching over here and taking me in your hand ...

HE: (Rolling over.) Nah! I seem to have lost the urge. 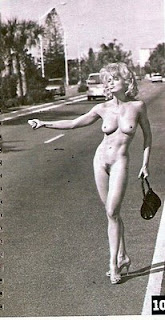 What Is Stress?
Driving along you see a beautiful and naked woman hitchhiking. You stop and pick her up. Trying to keep your eyes on the road causes you some stress.

What if someone you know witnesses this and tells your wife? You've started to become a little stressed.

Suddenly she has a seizure and faints in your car - in the front seat - and slumps against you! You are more than a little stressed.

You are unable to revive her and are forced to rush her to the nearest hospital. With your jacket covering only a little of her nudity you remember that you know people on the hospital staff. Now it's getting stressful!

The doctor tells you that she is pregnant and congratulates you that you're going to be a father. You tell him that you're NOT the father, but the girl insists that you are! It has become very stressful!

So you insist on submitting to a DNA test to prove that you're not the father. After the test results comeback the doctor informs you are NOT the father. The stress is abating.

Although it doesn't register at the moment, the doctor also tells you that you are infertile and probably have been since birth.

As you drive away from the hospital you think about the doctor's words as they sink in ... and you start to become extremely stressed.


My wife says I never listen to her. At least that's what I think she said.

A man is browsing around in a bookstore for half an hour or more not finding what he wanted. Finally he went to a clerk at the customer service desk.

"Excuse me," he says to her, "I'm looking for a book called 'The perfect marriage.'"

Says the clerk, "Have you looked in the Science Fiction section?"

That wife has some explaining to do. Bwahahahahahaha. Good ones.

Of course, if he hadn't picked up the naked hitchhiker in the first place, he wouldn't have been so stressed.

But then again ... he wouldn't be facing the question of the father of his children.