Life According to Elvis

SOME people follow Confucius, others swear by the philosophical insights of Plato or Sartre.


I for one, instead, study the songs of Elvis Presley. 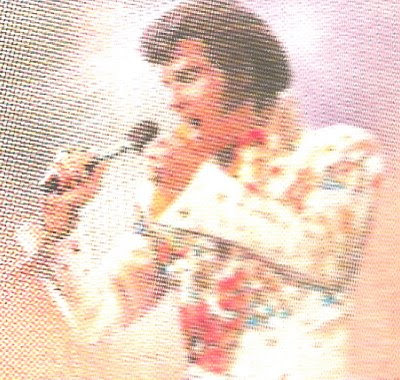 Taken as a whole, they contain everything from handy tips about geography
("a river flows surely to the sea") to practical travel advice (the YMCA in Memphis has cheap accommodations), right through to religious instruction ("I'm lonely like Adam, you're evil like Eve").

Herewith are the 30 things I've learned about life from listening to Elvis.


TRAVEL
1. The typical train is 16 carriages long.
2. All food in Germany consists of hasenpfeffer and black pumpernickel.
3. The Heartbreak Hotel is located at the end of Lonely Street and its desk clerk dresses in black.
4. Hula dancers are best judged by their ability to really move that grass around.
5. A harem in the Middle East contains 20 women.
6. So efficient is the US postal service that it will return an unwanted letter within 24 hours of its initial posting
.7. There are few sounds that make you feel more lonely than that of the midnight train.
8. If hitchhiking, it's hard to choose a better destination than Memphis Tennessee.


RELATIONSHIPS
1. When inviting a young woman to dance, you may increase your chances by noting that chicken is being served in the barn.
2. If rejected by the older sister in a family, by all means have a crack at her little sister, who may have matured more than you at first noticed.
3. Women named Marie are naturally duplicitous.
4. It's OK to date your cousin, providing she's a distant cousin "but not too distant with you".
5. Girls named Daisy tend to drive you crazy.
6. If caught without a partner during a dance at a federal penitentiary, why not try dancing with a wooden chair?
7. Conversation with a girlfriend can become tiresome if she fails to break up the conversation every now and then with a little action
.8. A .44-calibre pistol is an excellent firearm choice for a woman whose partner was doin' her wrong.


PERSONAL GROOMING
1. If wearing suede shoes, particularly of a light hue, one should make their protection one's No. 1 priority, even above that of preventing arson attacks on one's own home.


THE ANIMAL KINGDOM
1. There are few looks in life more intense than that of a one-eyed cat peeping in a seafood store.
2. A passionate kiss can be measured by the fact that even a team of wild horses would be unable to drag apart the two participants.
3. The embrace of a grizzly bear provides a useful point of comparison when considering the pressure necessary to demonstrate real passion during an affair.
4. A good hound dog should be able to catch a rabbit.


GEOGRAPHY
1. People are more likely to be alone during a blue moon than during any other lunar event.
2. In the state of Kentucky, precipitation usually occurs when a man is hitchhiking from town to town, having been abandoned by his baby.


MEDICAL
1. The lips of attractive women tend to taste like breakfast spread, in particular honey.
2. A temperature of 109 is quite common during the early stages of an affair.
3. The experience of love, especially early in life, can have serious medical consequences including sensations of itching, hand tremors, leg spasms, heart palpitations and language difficulties.


HISTORY
1. American soldiers were unable to approach young women in Germany in the period after the war, as local women wore signs in German saying, "Keepen Sie Off The Grass."


PHILOSOPHY
1. Children born in disadvantaged areas such as ghettos should receive special assistance as this reduces the likelihood of them turning to a life of crime, thus perpetuating an endless cycle of disadvantage
2. A rabbit's foot, while widely considered a creator of good luck, makes only a moderate contribution to one's happiness compared to the impact of finding a good life partner.
3. If you suspect someone is evil check their middle name because it may well be "Misery".

Now, show me one passage in Plato, Sartre or Confucius that can match all of that for depth, width and wisdom.

I've lived my life by it, how about you?

Long live the King. Or perhaps, Rest in peace.

He lives in his legacy, long after he was gone.