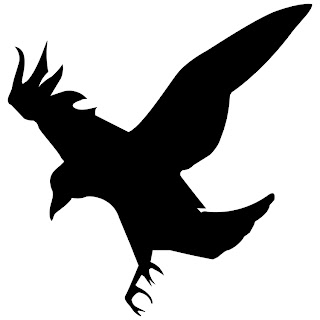 I looked upon the back-lit screen, the space where the dance of my fingers upon the keyboard should be magically transforming my ideas into thought-provoking words upon its surface; yet, the blank screen looked back, defiant and unyielding of such words.

Outside it was indeed dreary, the April Fool's Day's Nor'easter snow having given way to several hours of miserable rain. Had I not heard it, and had I not looked out the windows to observe it, I would've known nonetheless that it was so by no other perception than the protestations of discomfort in my joints.

I have experienced writer's block before on many occasions, and have found that if I just think of a book or any piece of literature that I've read in the past, sometimes an idea, even an offbeat idea might be evoked. In the end, the idea might be discarded, but at least it seems to light a spark in the dark recesses of my mind.

Once upon a midnight dreary, while I pondered weak and weary,
Over many a quaint and curious volume of forgotten lore ...

Curious? I'll say. It would appear that I channeled The Raven that morbid poem of mourning for a departed loved one by Edgar Allan Poe. It would seem that my use of the word "dreary" above brought the first two lines of that poem to the forefront of my thoughts. Rather than delete the two lines I decided instead to leave them there and to strike them.

Then the dog, apparently ready to retire for the night, chose that moment to pay me a visit for its nightly and obligatory goodnight pat on the head. Having received the gratuitous stroke upon its forehead, it turned to leave, but before doing so looked back, wagged its tail and offered up a couple of subtle yaps.

Curious? I'll say. Perhaps because of the two plagiarized lines from Poe, or most unlikely, the sound and the manner in which it spoke, I heard, thought I heard, "Nevermore."

I think that probably before the dog had even settled onto its padded pillow next to the bed and my sleeping wife, that my mind was already at work and the gears of thought had been engaged. Before I knew it, almost subconsciously, my fingers began to traverse the keyboard, the eventual product of their trek not clear until I actually brought my eyes to bear upon the screen.

Not only had I taken the liberty to plagiarize Mr. Poe, but I had undertaken an audacious attempt to parody the first verse of his poem.

Perhaps, the next time when my mind comes up blank and I find myself in the throes of writer's block, I will think of some other writer. As for Poe, nevermore.

Very good use of writer's block, loved it! Muriel.

Ah, distinctly I remember, it was in the bleak December,
And each separate dying ember wrought its ghost upon the floor. And the silken, sad, uncertain rustling of each purple curtain
Thrilled me, filled me with fantastic terrors never felt before . . .

That from memory. One of my all-time favorites; I memorized most of it in high school. (Actually, as I think on it I believe I've mixed lines from the second and third verses. But who's checking?)

As for the block, nevermore.

...then again, maybe they deserved the rant.

Very good. I won't be checking.

That would be nice ... but alas, I know there will more days with blocks.