Why now? Why wait so long to produce it?
Is he afraid of Donald trump? Does he honestly think that Trump poses a reelection threat? I seriously hope not.
One thing IS certain. The so-called birthers will not be satisfied. Had this document been produced before he won the Democratic nomination, the question of his birthright would have never become an issue in the first place. Throw in his initial reluctance to wear the American flag pin on his lapel and the numerous times he has shown ill-advised over-the-top respect for the Muslim people, is it any wonder that his patriotism would be called into question?

In his recent address to the press he referred to the matter as silliness. Excuse me, but he brought it on himself by not producing the document when his place of birth was challenged. Is he so arrogant and/or stubborn that he felt he was above it all? "I'm the President, how dare anyone question me?"

Paraphrasing, he also said that he had more important things to do. Then why in the hell isn't he doing those things?

I just had an epiphany! He purposely has been letting the cloud of doubt about his birthright hover over the heads of the American people as a distraction from the fact that his performance thus far as President has been for the most part inept.

Why produce the birth certificate now? It makes sense when you think about it. Time is growing short before it will be time for him to hit the campaign trail for the 2012 elections. By finally producing the certificate, he is hoping its specter will have dissipated by the time the people place their votes.
How Do Editorial Cartoonists See It? 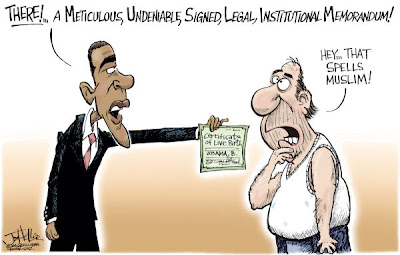 How Does One "Birther" See It? 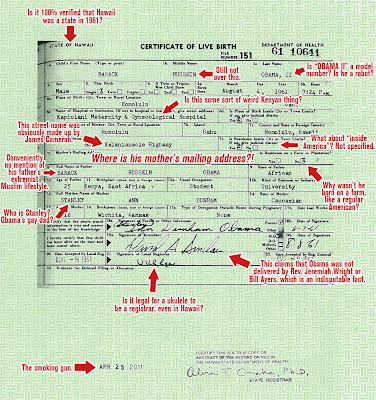 I had to laughingly admire the effort that someone put into the above copy of the just-released birth certificate.

I'll conclude by reiterating that Obama brought this all on himself. When he fails to be reelected, perhaps he'll sit down at home and wish he was NOT born in the United States!

I think that this is all B.S.No other candidate had to produce their birth certifcates why in the hell did he have to??

You know what I think about all this. I agree with you that he brought this all on himself. He's been secretive about most of his life.

I'll be glad when he and his minions are out of the white house. They scare me to pieces.

Mike I agree with you. Has it occured to you that he doesn't need to prove anything to anyone.
He has not been an inept president like Bush now that man certainly was in ept. Obama on education is right on. That is something he will be known for. This always happen when your in Office people don't appreciate you but as your out of office they all of a sudden love you. Americans don't know what the helll they want. Sometimes wanting to much. I am an american by the way. His espect for muslim people should show people that we should have respect for all people no matter the differences. It seems you have fallen in to the republican trap. They make alot of noise about nothing. Yet they were the ones that ran this country to the ground. Obama is right about making rich people pay more taxes. Only if you look you would see that many rich business men that pay hardly any taxes are republican. At least his intentions are good unlike alot of politians. Democrats isn't so great either but it's the lesser of two evils.

I guess it is B.S. As for other candidates, I'm sure there was never a problem locating them if anyone was interested. Just the fact that he failed to produce it in a timely fashion caused all the "controversy."

It should have been produced before he was allowed to accept the Democratic nomination.

You are right. He is a publicly elected official and as such his life is an open book.

Under the constitution, he DOES have to be an American citizen and if that is called to question - then Does have to prove it.

Actually it is proven if he was nominated fo the democratic nomination therefore it really shouldn't have been an issue. This was another play or trump to get in the spotlight. I respect Trump as a businessman but not as a person.