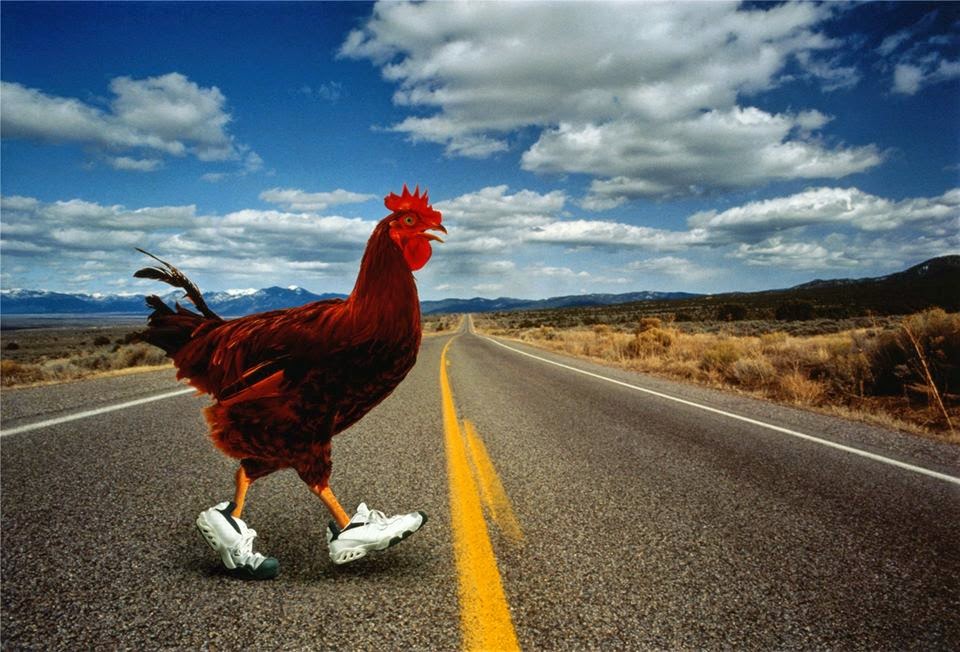 Why Did the Chicken
Cross the Road?

Why Did The Chicken Cross The Road?  Why don't we confer with some famous people?  Maybe, just maybe, they will be able to enlighten us on this enigmatic, if not controversial, issue.


SARAH PALIN:  The chicken crossed the road because, gosh-darn it, he's a maverick!

BARACK OBAMA: Let me be perfectly clear, if the chickens like their eggs they can keep their eggs. No chicken will be required to cross the road to surrender her eggs. Period.

ELIZABETH WARREN:  The chicken had learned from her mother that an Indian tribe was located on the other side of the road, and by crossing the road she would become a member of the tribe.

JOHN McCAIN:  My friends, the chicken crossed the road because he recognized the need to engage in cooperation and dialogue with all the chickens on the other side of the road.

HILLARY CLINTON:  What difference at this point does it make why the chicken crossed the road.

GEORGE W. BUSH:  We don't really care why the chicken crossed the road. We just want to know if the chicken is on our side of the road or not. The chicken is either with us or against us. There is no middle ground here.

BILL CLINTON:  I did not cross the road with that chicken.

AL GORE:  I invented the chicken.

JOHN KERRY:   Although I voted to let the chicken cross the road, I am now against it! It was the wrong road to cross, and I was misled about the chicken's intentions. I am not for it now, and will remain against it.

AL SHARPTON:  Why are all the chickens white?

OPRAH:  Well, I understand that the chicken is having problems, which is why he wants to cross the road so badly. So instead of having the chicken learn from his mistakes and take falls, which is a part of life, I'm going to give this chicken a NEW CAR so that he can just drive across the road and not live his life like the rest of the chickens.

ANDERSON COOPER:  We have reason to believe there is a chicken, but we have not yet been allowed to have access to the other side of the road.

NANCY GRACE:  That chicken crossed the road because he's guilty! You can see it in his eyes and the way he walks.

PAT BUCHANAN:  To steal the job of a decent, hardworking American.

MARTHA STEWART:   No one called me to warn me which way the chicken was going. I had a standing order at the Farmer's Market to sell my eggs when the price dropped to a certain level. No little bird gave me any insider information.

ERNEST HEMINGWAY:  To die in the rain, alone.

BARBARA WALTERS:  Isn't that interesting? In a few moments, we will be listening to the chicken tell, for the first time, the heart warming story of how it experienced a serious case of molting, and went on to accomplish it's lifelong dream of crossing the road.

ARISTOTLE:  It is the nature of chickens to cross the road.

BILL GATES:  I have just released eChicken2014, which will not only cross roads, but will lay eggs, file your important documents and balance your checkbook. Internet Explorer is an integral part of eChicken2014. This new platform is much more stable and will never reboot.

ALBERT EINSTEIN:  Did the chicken really cross the road, or did the road move beneath the chicken?

COLONEL SANDERS:  Did I miss one?

Well, so much for the experts!  I guess, we'll have to continue to draw our own conclusions.   Remember, as long as there are roads and chickens, this perplexing question will continue to plague mankind.
Alas, we still cannot come to an agreement regarding creationism and evolution:   Which came first?  The chicken?  Or the egg?

Rather than tax our brains with such profound problems, why not lighten the mood with some good old fashioned humor? 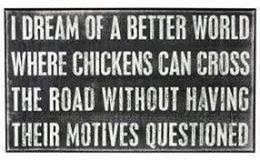 WHAT IS YOUR FAVORITE ANIMAL?

Our teacher asked what my favorite animal was, and I said, "Fried chicken."
She said I wasn't funny, but she couldn't have been right, because everyone else laughed.
My parents told me to always tell the truth. I did. Fried chicken is my favorite animal.
I told my dad what happened, and he said my teacher was probably a member of PETA. He said they love animals very much.
I do, too. Especially chicken, pork and beef. Anyway, my teacher sent me to the principal's office. I told him what happened, and he laughed, too. Then he told me not to do it again.The next day in class my teacher asked me what my favorite live animal was.
I told her it was chicken. She asked me why, so I told her it was because you could make them into fried chicken.She sent me back to the principal's office. He laughed, and told me not to do it again. I don't understand. My parents taught me to be honest, but my teacher doesn't like it when I am.Today, my teacher asked us to tell her what famous person we admire most. I told her, "Colonel Sanders."
Guess where I am now...
No. 2152

Curmudgeon responsible for this post: Hale McKay at 1:04 PM

Oh, wow! It's been a year since my last post here!

No promises - but maybe I'll get back to some regularity.

Being a vampire is not what it seems like. It’s a life full of good, and amazing things. We are as human as you are.. It’s not what you are that counts, but how you choose to be. Do you want a life full of interesting things? Do you want to have power and influence over others? To be charming and desirable? To have wealth, health, and longevity? contact the vampires creed today via email: Richvampirekindom@gmail.com