Ghost Writers In The Sky 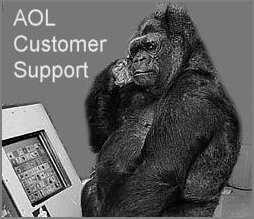 When I think of ghost writers, I think of some nondescript person who just had their 15 minutes of fame. That person is usually not he sharpest knife in the drawer. More than likely he/she cannot put more than five words together to form an intelligent sentence, which by the way contains no words of three or more syllables. That is where the ghost writer comes in.

I have come to the conclusion that unemployed ghost writers work as temps and fill those positions bearing such titles as "Technical Advisor" or "Technical Support Associate." I do believe I just recently received help from one of these "techs."

I had just finished deleting and marking mail as spam in my AOL mail box. After those 278 items were zapped, I was about to read the onerous list of 5 legitimate e-mails from my two sisters and my daughter. When all of a sudden a screen-filling pop-up filled the sc

reen. It was an oficial-looking AOL message. It read in a manner to make me think that their techs behind the scenes had detected an unusual amount of deletions from my AOL mail box. As a service and in order to provide a secure environment for my private mail, they were reinstating those deletions and would remove what appeared to be an erroneous spam tag.

bout efficient, I didn't even even have time to close the window because it disappeared from my screen. As the message had said, there I was, the proud recipient of 283 pieces of mail in the new mail file. I refreshed the page and what do I see? Another pop-up window, this one telling me there was another 174 messages that been deleted in error three days earlier. Do I have to tell you, or did you guess already? Poof! I now had 457 pieces of new mail.

Sometimes when we are angry we say and do things we would not normally do. Actually trying t

o call Technical Support is one of those things. After listening to a medley of Yani and Zamfir hits and about 15 interruptions of a recording telling me how much they value me as a satisfied customer, a live human voice identifying herself as Michelle spoke, "America On Line Assistance, how may I help you?" I hoped she could I answered. But when I relayed my predicament, the angel turned out to be quite the opposite. "Oh, we at AOL would never do such a thing. You must be having trouble with your servor," she pontificated. Before I could protest she said, "Have a nice day. Thank you for calling AOL On Line Assistance," and with that she broke the connection.

I really must buy an updated edition of American Dictionary of Slang because in the following few minutes I used up all the those kinds of words I knew. To make a short story longer, I proceeded to once again to tackle my e-mail.

I wonder, when the need for ghost writers picks up, which Michelle gets to write for the "Runaway Bride," or Michael Jackson's victims, I mean accusers? Devil or angel? (Sounds like a good song title.)

Curmudgeon responsible for this post: Hale McKay at 10:56 PM

I'm surprised. I've always found AOL technical support to be extremely if not overly friendly and helpful with case numbers assigned and follow-up e-mails asking how the person I spoke to performed his tasks. I would definitely complain.

That's a ton of spam. Hope you can get rid of it for good.

In a split second said...

Actually Karyn, that is the first and only time i ever called AOL for technical sypport. Maybe Michelle got up on the wrong side of the bed?

You are invited to join our new ghost writers program.

This Ghost Writers Program allows you to easily find and bid on projects posted by our users who are eager to hire you for your ghost writing services.

We currently are looking for both BUYERS and GHOST WRITERS.

The service is free to signup.

To find out more about this program, go to our web site: