How Do You Blog? 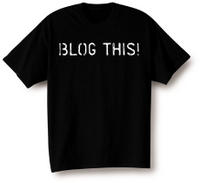 I sometimes get to thinking ... Not a good idea for an unlicensed thinker ... About how other people produce their blogs.

Do you just sit down at the keyboard and start typing the thoughts that enter your mind? Do you have an idea of what you're going to write? Are you compelled too, to post even if you have no idea of what to write?

As for myself, it is seldom that I compose directly to the screen. I usually write out my blogs onto a legal pad. That affords me the opportunity to edit before before I publish. I can fix a faux pas before committing it to the screen. As this is a public forum, I don't wish to across as a crude rude and lewd dude by exposing my dangling participles.

If my postings are to be in any way based on fact, then my information should be correct. "Sho

w me a reporter who only gets half the story right ...And I'll show you a reporter with a 'nostril for news." ("Borrowed" from the 10/20 comic strip B.C.) It is not easy to scour the news for interesting information, I mean have to actually read those articles! Take for example a column titled "Briefs In The News," if I weren't careful, you'd think you were reading about underwear.

You'd be scratching your head if on a posting you were to read about a man who was arrested because the authorities had found $100 bills hanging on a clothes line in his back yard. By neglecting to provide the title, "Wiseguy Busted 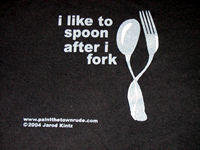 For Money Laundering," you would miss the point of the story altogether.

Sometimes I have no particular topic to discuss. When that happens, I'll hop on the old surf (mouse) board and "borrow" a picture or two and upload them. Many times I find myself inspired by a picture or an image to write a blog around it. When that fails, I'll type in a title and try to give it a story. When that fails, I will slip into a blathering ramble, (sic) this posting.

A random thought can sometimes blossom into a post-worthy blog:

Male voices change at puberty: I wonder what Gilbert Godfrey sounded like before that change.

When you do number two and leave only one piece of evidence, would that be a monolog?

Is lemon aid a branch of Medic-aid that provides financial assistance for used car repairs?

If a gynecologist were to give up his practice and study law, would he then become a Pubic Defender?

Did you ever notice that "blog" spelled sideways is "glob?" No? Well it does!

I wonder what methods you other bloggers employ when experiencing writer's (blogger's) block. There is one method that some probably use ... Which I am too stubborn to use ... And that is to simply not post anything. How do you do that? You know, after giving it some serious thought, I really don't want to know!

Curmudgeon responsible for this post: Hale McKay at 1:21 AM

Uh! You mean I read this all the way through, and now you don't want to know? Ok then, I won't tell you! :D

I ain't about to tell!

Truth be told, I was really happy to see the comment on the blog I post to most often.

After about 5 other blogs that I have and post to occasionally, I commited to posting every single day to the one you found. Seems it helps with the readership, imagine, they want something new everyday......

Anyway, thanks for the comment, added this one to my read list and will visit when I can.

My 16 year old son and I hit a select list of blogs when I get home from work and this may be one of the regulars.

Screw you, I'm telling you anyway. :)
Sometimes I get so involved in blog READING that I don't have time to post on my own. THAT, my friend, is how it's done.

I steal ideas from other people.
Okay, not really...but sometimes when I have nothing to say I'll just start going through my blogroll and often get a spark of an idea.
And sometimes I post a 'stream of consciousness' entry...and just type as the thoughts come. Hence the Brain-Soup part of my URL. I compose mostly in my head, let it swirl around for a day or so, then send it right to the screen, with no editing or proofreading.

Now you can delete this comment since you didn't want to know anyhow.

Then you say: Dear Reader, please use these four words IN ONE SENTENCE, and post it in the comments section. I will do the same, if I get around to it.

This works real well, I imagine. I never read the comments, so I'm not sure.

When I have writer's block, I post some old email jokes and I search other blogs for inspiration.

Like, I mean, I never have time to, uh, whatever, so then I said that I was so busy, whew, I mean really busy, what with, like, um, all of that stuff, and finally, like, you know, um, I got to this place where you were and I like, Mr. what's up with you and he was like, um, uh, like, so wha's up, and like we were at this place, like, it was so not there, but we were there and uh, like the blog was really cool.

I'm so brand new to this, I worry that I've used up my best stuff already in the 8 days since I started this. What if I run out of things to say in 2 more days? I guess I will just post something about someone at work, then delete the blog and you will all assume I got fired or something.

shoot, I SWEAR that these word verifications are a sobriety test.

Since they put the firewall up at work to blogspot it's really cut down on my blogging time, both posting and blogrolling. (Okay, so I'm more loyal when someone's paying me to do it.)

As far as inspiration, I try to do something different from one day to the next and there's no telling what the muse will whisper.