Shrimp On The Barbie

Introducing a Sci-Fi Suspense Comedy Mystery Farce Story! A new genre created just for you blog readers. Why? Because I like you. And because it "wasn't" there.

They just washed ashore one night. Beyond the breakers tremendous waves thundered, pounding relentlessly upon the flotsam that had been their craft. Adapted for life in the sea, they had deftly avoided the large rocks littering the shore.

There were reports flooding the office of Sheriff Harry Fuzz that sea monsters had invaded the small fishing village of Barbie. Ida Claire said she had observed giant shrimp walking through her back yard ruining her garden of prized dandelions. Noah Nickers claimed to have seen big kewpie dolls strolling down Main Street. It had scared him 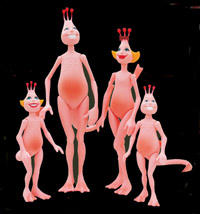 so much that he had dropped his expensive bottle of wine. It was Friday, and at 85 cents a quart, he had bought the second-from-the-bottom-shelf stuff to celebrate the weekend.

"I guess I gotta charge 'em with grand larceny," Fuzz thought, "In addition to jay-walking nekkid through my town." He picked up an empty can of Diet Moxie and flung it across the room. It struck his deputy, Buster Cherry right smack on the forehead. He jumped to his feet as if he had been struck by a can. Fuzz shook his head and said, "Reflexes of a three legged moose!"

"Go get the squad car warmed up," he said tossing the keys to Buster, "We got us some trespassers that are impersonating shrimp."

"Ya spose they might be real shrimp, Boss?" he asked after they had sped off to the scene of the last reporting sighting.
...."Now why would ask a fool question like that?" Fuzz answered.
...."Well, it's not like I had any supper yet! I'm hungry and I like jumbo shrimp."

"Good help is hard to find," the Sheriff mumbled.
...."You an' me can handle 'em. We don't need no help," said Buster. He pulled his pistol from the holster and attempted to twirl it in his fingers. It promptly fell and landed on his foot, causing him to hop around in agony.
"Heaven help 'em," Fuzz groaned.

They arrived at the park bench across from the liquor store. It was beyond him why they called that old sidewalk seat a bench. Everyone in town knew it was where Noah Nickers slept every Friday night. When he took to drinkin' his ol' lady just locked him out of the house. Rose Nickers felt if her man was gonna drink like a bum, then he might as well sleep like one.

Flashlight in hand, Buster began checking out the park. Only a few steps in he found some trash lying in the path worn in the grass next to the "Keep Off Grass" sign. He nervously unholstered his pistol. Inspecting the litter, his lip began to tremble. There were four empty boxes of fish sticks. "Sheriff Fuzz!" he called out. "You gotta see this. It's ... It's just horrible!"

A twig snapped behind him. He lunged into action, and in five motions unholstered his gun, raised it and fired ... but there was only a snap of metal on metal. "Gosh darnit! I done forgot to put bullets in my gun again!" He shouted.
...."It's damned good thing too!" screamed Fuzz. "You trying to shoot me, Deputy Cherry?"
...."No Chief, I thought it musta been those monsters."
...."Monsters? What monsters? You been sniffin' that glue again?" He shook his head, and the more he thought 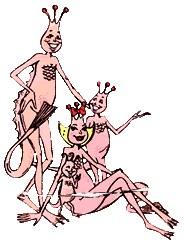 about it, he was always shaking his head when Buster got involved with any serious police matters.
...."No, Chief. Look." he said pointing to the empty boxes on the ground. "Only monsters would eat the last four boxes of fish sticks left in town!" Fuzz squinted at his deputy. Was there really tears in his eyes? "Only two hours ago I was in Dick Bender's grocery mart and had him hold those fish sticks for me until I got off my shift. And darn it, I already paid him for them!"
....Harry Fuzz asked his deputy, "How much you out for 'em?"
...."Three Dollars and fifteen cents!" He was quiet for but a moment. "Do they think I'm made outa money?"
....The Sheriff let out a low whistle. Counting Nickers' 85 cent bottle of wine, the crime spree was was costing the town of Barbie four dollars so far. The last time there had been a crime of this magnitude in their fair town was when Ben Dover took his grandmother's Red Rose Tea figurine collection to school for show and tell. Poor young Ben forgot to get her permission. It had taken Harry all of three days to solve the crime because Ben had forgotten them at school. That was on a Friday and the school was closed the weekend.

"Let's go see Dick Bender, Buster," said Fuzz, "Maybe he can identify them and give us something to work on."
....They entered Dick Bender's grocery store and stopped. Bender wasn't at the register and the door was open. That wasn't like him. Fuzz, over his shoulder said to his deputy, "Something's amiss."
...."Yes, Sheriff Fuzz?" said a woman's voice from behind the potato chip display.
...."I wasn't calling you, ma'am," he responded. "I was just noting something in here was amiss.."
...."Yes?" said another woman's voice, this time from the greeting card aisle.

Deputy Cherry had been checking out the back of the store aisle by aisle, while up front Fuzz was getting statements from the two women. He noticed a certain smell as he neared the refrigerated chest out back. He heard a muffled sound coming from behind the door. The distinctive odor of fish was strong.
...."Oh, God!" he muttered. "Don't tell me they done got the fish cakes too!" He pulled out his gun and hollered out for the Sheriff, "Harry. You better get back here. We got the percolators locked in the fridge!"
....In moments, gun drawn he was by the deputy's side. "Percolators?"
...."Yeah. the ones that we are looking for," he replied. "They're in there."
...."Perpetrators! Perpetrators!" he said glaring at him.

Taking a deep breath, Fuzz motioned for Buster to open the door as he trained his pistol at the handle. He felt a few beads of sweat forming on his brow. He sniffed the air, detecting another odor stronger than the fish smell. He sighed and shook his head. His courageous deputy had shit himself. He tensed as Buster's hand reached for the metal handle. This was one of those moments that he had trained so hard for over the years. He swallowed hard and tensed as Buster began to pull at the handle.

No.388
Curmudgeon responsible for this post: Hale McKay at 1:35 AM

ATTACK OF THE SEA MONKEYS! Run for your lives! ;)

"His courageous deputy had shit himself"

My soda just sprayed out my nose. Thanks.