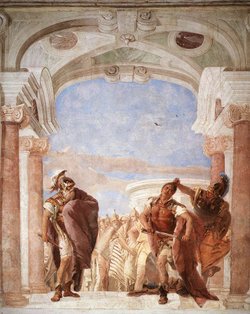 Even if you're not familiar with Greek mythology, it is reasonable to assume that you have heard the name Achilles. Indeed tissue in the human foot, the Achilles tendon, is named for him. The cliched term Achilles heel refers to a specific weakness.

Achilles is the greatest of Greek heroes as recorded in Homer's Iliad. He is a principle warrior in the Trojan Wars. The son of the powerful King Peleus, his mother was Thetis, the sea nymph and one of the Nereid.

To protect her son from the jealous Gods, Thetis dipped the infant Achilles in the waters of the River Styx. The waters gave her son the power of invulnerability. She had held Achilles by his heel when she immersed him. As such Achilles' heel remained dry and was not protected.

During the final battles of the Trojan Wars, a well placed arrow from the bow of Paris struck Achilles in the heel, mortally wounding him.

Thanks to the Homeric epics and several movies, most of us know the story of Achilles. Sometimes in history, many facts are lost to the ravages of time. It is said that the victors write history.

All but forgotten is the fact that Achilles was not an only child. In fact, Thetis had given birth to nine other sons. Like her eldest, she also immersed his siblings in the Styxian waters. During the Trojan War, there were ten powerful warriors who fought the Trojans. The brothers did not achieve the fame or a place in history as that of Achilles. In battle all of them fell before Achilles' death.

History doesn't reveal why, or if it was by design, that Thetis chose to hold each of her sons by different parts of their bodies when she dipped them in turn in the waters of the river Styx. Perhaps she thought that if each had a different weakness, they would have better chances to survive. Or maybe she was just a dingbat.

She held Moronocles by his head. Nick-named Maury by his siblings, Moronocles was quite stupid. As such he charged into a line of Trojans bearing spears without raising his shield. It is said that his last words were "Ouch! That hurts." The cruel term 'moron' is in his memory.

Audiocles was held by his ears. He was totally deaf. In battle he was run over and trampled by a team of chariot horses, ecause he didn't hear them coming. To this day, the term "audio" is applied to sound.

Snifocules had been held by his nose. Sniffles, his nick-name, had severe allergies. While trying to place a finger under his nose in attempt to stifle a sneeze, he let his guard down and was run through by a Trojan's sword. When we see the word "sniff" we think of smell.

Turfocoles was dipped into the water dangling by his big toe. Not the most graceful of the brothers, he stubbed his toe on the armor of a fallen warrior. While he was dancing around holding his aching toe, he fell to a hail of arrows from Trojan archers.
To this day his name is lent to an injury usually associated with athletes, turf toe!

It must have been uncomfortable while his mother held him by his jaw, but Glasicules was actually the biggest and the strongest of all her sons. In the heat of the battle, Glasicules was a one-man army, mowing down the Trojans as fast as he could get near them. The wooden shaft of a spear struck him in the jaw and he fell in a heap. A phalanx of the enemy swords finished him. To this day he is immortalized by what we call a 'glass jaw.'

Carpelacles usually wore a leather band around his vulnerable wrist where his mother had held him. When his wrist grew tired, he was forced to switch sword hands occasionally. It was during this exchange that he was struck down. Painful wrists, called Carpal Tunnel Syndrome today, borrowed from his name.

Held by the elbow for his immersion, Tenisocles often had trouble bending his arm without pain. Because the path of his sword thrusts were so low, a Trojan warrior easily ran a spear through his heart. To this day, that elbow problem is often referred to as 'tennis elbow.'

It was by the knee that Patelacles had been dipped into the water. Ironically a wounded Trojan threw a rock at him, and struck him in the knee. Writhing in pain on the ground, he stood no chance as several Trojans closed in on him. Many people have knee problems in the present-day world. In his honor, the kneecap became known as the patella.

Having forgotten his cod piece, Testicules tried his best to avoid low blows. His mother had held him in the most tender spot that a man can be grabbed. It was while he was engaged in a close-quarters sword fight, that his combatant chose to lick him in the groin. Only a man can know the pain a kick to the family jewels can cause. Today every male knows the importance of a good cup. Besides the threats to a man's future reproduction activities, he can also suffer pain caused by denial of such activities, the dreaded blue balls.

No.406
Curmudgeon responsible for this post: Hale McKay at 12:38 AM

That comes from an old Christmas season song:

Did you catch the mis-typed word? Leave it ot me to find it!

Actually Mike, I caught this post today BEFORE I saw your comment on my blog about Pyrrhus. Good stuff on Achilles' brothers. You may have inspired me to do a post on some additional "historical" characters. We'll see...

You have a very nice blog. I have enjoyed all the articles.

This post brought back memories of my childhood. In particular, my first visit to our national library with my parents and the first book I borrowed was one on Greek Mythology. Nice post - enjoyed it.

that is way too funny. I was half way into until it grabbed my testicles.

Did you know that Tofurcules was also a vegetarian and invented TOFU!???!!!!!
hahahahahahahaha