Nightmare on the 24th 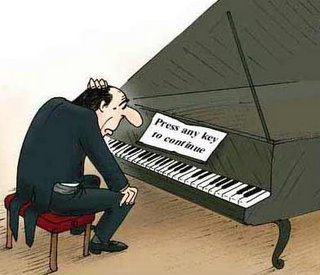 If only that was my dilemma. In order to make a choice or to make a decision, you must have more than one option. You can't flip a coin. You can't "eeny-meeny-miney" unless you have a choice. I couldn't even ask a passerby to play "rock, paper and scissors."

You see, I didn't have the luxury of deciding between two options. Alas, I didn't even have one option. I had nothing!

(Insert opening line from some great work of literature.) It was the best of the times, it was the worst of times. That's close to the impending gloom I felt. It was a dark and stormy night. No, that doesn't work. Twas the night before Christmas. Ah, there you go. That's the one.

This year I was one of those last-minute Christmas shoppers. It wasn't by design. It just worked out that way, much to my chagrin. To make matters worse, this is the first Christmas that I can recall that I had absolutely no idea what to buy. (No idea, as in clueless.) As such, I had no idea where to go to purchase "something yet to be determined." This year I got it backward, b

ecause last minute shopping is reserved for last minute gifts, such as stocking stuffers. Well, I had already bought those weeks ago. The "good" gifts are the ones you know your going to buy. You're supposed buy them weeks ago!

This year there no hints. There were no clippings or pictures for me to accidently find. No notes had been slipped into a jacket pocket. Therein lies my quandary. Neither my wife nor my daughter particularly like jewelry. Both of them have either skin conditions or allergies, thus removing cosmetics from the running. It was declared a long time ago, that I am n 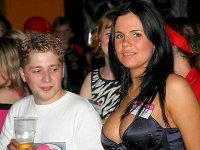 ot to be entrusted with buying clothing for them.

Not that I think appliances make good Christmas gifts, but those were also exempt. It seems that both of them have every gadget and gizmo imaginable. I know, because I bought some of them in the past.

I'm not a rocket scientist by no means, but I think I know what that guy in the tee shirt wants for Christmas. Right you are. He is dreaming of a Garfield Chia Pet! I'll bet his favorite Christmas song will soon be: "All I Want For Christmas Is My Two Front Teeth." Poor guy, all he was trying to do was to read her name tag!

So there I was out on the front lines. Every aisle was a gauntlet to run. Every display was a pillbox, elbows and feet firing like machine guns. Perish the thought that a medic could get to you in time. Midget battalions resembling unwatched children were darting from the ramparts of clothing racks. Once through the maze of rampa

rts you would emerge into a clearing of floor littered with shoes and toys laid out as if it were a minefield. One misstep would prove injurious. The enemy was a pilfering horde. Every item that had been in a box was removed, only to be found two or three aisles away. There were obscenities bursting in the air as the enemy fought in close quarters with clerks at the registers.

My spoils secured, the battlefield was soon behind me. An officer was directing traffic. There is one sure fire way to create a traffic jam, and that is to assign a detail cop to direct entering and exiting vehicles onto a shopping mall. Where once there had been bumper-to-bumper slow moving traffic, there was then bumper-to-bumper unmoving traffic- a two-lane parking lot.

Finally, under a covert operation, I wrapped the gifts and placed them under and about the Christmas tree. It was only then I sat down and recorded the events into the file marked: the Xmas-Files. Scully and Mulder would have been proud.

Curmudgeon responsible for this post: Hale McKay at 10:30 PM

Doing your Christmas shopping on Christmas Eve can make the decisions easier. There are few stores open, so you don't have to decide where to shop. There is precious little merchandise left, so you buy what's there. Doesn't make the gifts great, though.

But men can often get a pass on that, just for being male! Everyone, repeat after me... "its the thought that counts."

Merry Christmas, Michael, to you and your family and your readers!

I highly recommend last minute christmas shopping. Many people perform better under pressure. So what if the merchandise is picked over. It's easier to select the only decent gifts left and you are often much more creative. And you definitely have an ending to your shopping. You either a) run out of money or b) the stores close. Happy day!

lol point, how true how true,...i also had to get my shopping done on christmas eve, also not by design. with the hours ive had to put in lately, it was my only chance to shop. thankfully, most of it was done at the local jewelery store, so the wife didnt care LOL! the wife bought everyone else's gifts, so i didnt have to worry about it anyway. great post point ol' pal, and to you and yours, the merriest of christmas wishes, and have a happy new year! (but be careful and watch out for amature partiers!)