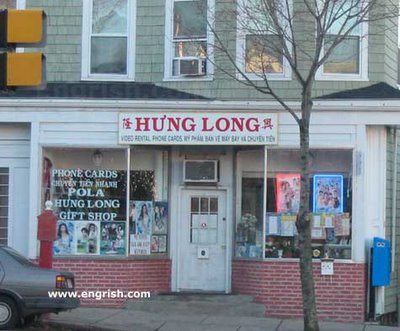 When I stumbled across this photograph, I felt a sense of deja vu. Does that ever look familiar, I thought. At first, I was about to chalk it up that I'd seen the picture before. Then it hit me like a ton of onion dip. I wasn't eating bricks at the moment, but I was having some chip and dip.

Not only was this store front familiar, I just happen to drive by it nearly everyday. It is located in Malden, Ma., a mere mile or so from my front door in the next city over, Everett. It is located on Main Street at the junctions of Cross and Medford Streets. It isn't far from a restaurant called Dung Do.

Just call me Blissful Smickleifigus. This "Elf Name" thingie was featured over at Miss Cellania's, so for laughs I thought I'd give it a try. "Smifckleifigus is the name, and blogging is my game."

I also tried my pseudonym, Hale McKay and was given the elf name: Batty Sugar-socks. I think I'll stick with Blissful Smickleifigus, thank you. 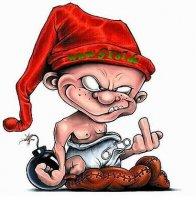 Speaking of elves, I "harvested" this cute little guy from a post a while back by the celebrated Old Hoss. I believe this guy just might be telling us that we are number one in his book. Otherwise he is guessing our age or I.Q. Then again, he may be hitchhiking a ride from a helicopter.

Sometime ago, I found this site that suggested you could have a duplicate drivers license made up for you online. I should have known that it was a gag, but nonetheless I took the bait. They reeled me in and issued the one you see here. 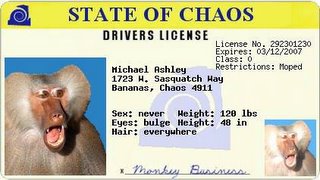 My new license will come in handy tomorrow while I am out Christmas shopping. Today was payday and finally I can get out there and buy all of those "I-have-no-idea-what-to-get" gifts. When I try to write checks for my purchases, they'll probably ask for some ID.

That's right, I'll be one of those last minute shoppers - and on Christmas Eve no less! It's not that I haven't tried to get some shopping done, but my schedule and the fates have had other ideas.

After fighting the traffic and the crowds, the gifts and I are going to have to go to battle with rolls and sheets of wrapping paper.

Curmudgeon responsible for this post: Hale McKay at 4:56 PM

Love your elf name; mine is Zippy Fluffy-Paws.

That store name is a riot!

You're shorter than I pictured. but the hair everywhere? I pictured that ;)

Not a bad dl picture, though. Mine usually turn out pretty bad.

I'll meet you at the store~I have TWO as-yet-unpurchased gifts to get.

Oh, and maybe we could have lunch at Dung Ho after. I've always wanted to eat at a place called "Dung".
Not.

Maybe when you're out doing your last minute christmas shopping, you should stop by for some chinese food!