Chicken Poop For The Sole 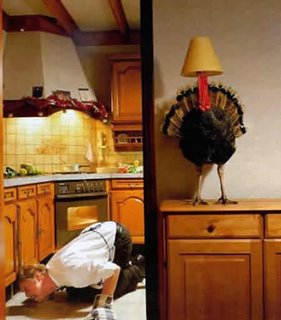 It's been forty plus days since Thanksgiving Day, and Steve has been looking everywhere for that bird!

When I was a young lad we used to spend a lot of time at our Grand Parents farm in Roane County. Their farm was so far back in the hills, Gramps said they had had to pipe the sunshine in. He used to say that Amma, the nearest town, was so small that the city limits were on the same sign post.

Those of you familiar with rural Appalachia, know that phrases were uttered rapid fire. It was like some sentences were just one long word: "Sofarbackinthehillstheyhadtopipethesunshinein," and "Thetownwassosmallthecitylimitswereonthesamesignpost."

All of us grandchildren were often referred to as "whipper snappers." Even though we were just kids, when there were chores asked of you, you did them. There was to be no playing around until the chore was completed. If you did get caught playing around, Gramps had a very colorful way of getting your attention, "BoyI'mgonnakickyourasssofarupbewteenyourshouldersyou'regonnahaveto-takeyourshirtofftotakeacrap." The translation for you unfamiliar with Hillbilly jive is, " Boy, I'm gonna kick your a

ss so far up between your shoulders you're gonna have to take your shirt off to take a crap!"

One of the chores we were sometimes asked to do was to gather some eggs from the hen house. Easy enough, right? There shouldn't be anyway to get into trouble gathering eggs, right? Well you are going to have a chore trying to convince me and Matilda. Ah yes, Matilda, the terror of the hen yard, always had other ideas. To us kids, Matilda was the biggest baddest thing on that farm. No, we weren't afraid of a chicken. We were not chicken chickens.

You see, Matilda was a large, nasty white goose. We learned a long time before that you never played around the chicken coop. If you failed to obey that commandment, Matilda wasn't too far to reprimand you for your sin. That damned goose wouldn't stop chasing you until you either got inside the coop and closed the door or climbed up the nearest apple or cherry tree. Hah, people use German Shepherds and Dobermans as watch dogs! They couldn't hold a candle to Matilda, so relentless was she in her pursuit. Now, imagine you are the one not in a tree, but the one inside the coop. Your mission, should you have accepted it, was to grab some eggs from the roosts, dodging several pecking beaks from the hens and then (gulp) go back out into the hen yard - and run like hell!

All the while, unbeknownst to us, our parents and Grandparents would be in the house looking out the window laughing their collective asses off at the spectacle. In time, we learned that they were testing our mettle. They wanted to see how inventive we would become. In the meantime, I began to look at it as a challenge. After a fashion, we figured out that if we worked in tandem, we could at least manage to actually get some eggs with loosing them or breaking any. That meant one of us had to be the decoy and get to goose to chase him, while the other went to the coop. Well wouldn't you know it? That goose wasn't born yesterday. If there were any flies on Matilda, they were paying rent.

If it didn't beat all, that goose realized the one with the basket was the one she should be focused on. So much for plan A. Even if we both made a rush to the hen house, the goose followed the basket. One day we tried a little razzle-dazzle ala football, and attempted a lateral. I'll be damned if that stupid goose didn't intercept the basket. The basket slipped over its neck and gave us a chance. We gathered the eggs and walked calmly out of the hen yard. Matilda was honking angrily try to shake that basket from her body. When we were halfway to the house she managed to rid herself of the basket and stood honking and glaring at us through the fence.

After our victory, we marched proudly into the house with our booty. We were surprised to get scolded instead of being praised for besting Matilda. You see, we forgot to wipe our feet on the rug outside before coming inside. We were tracking chicken poop from the soles of our shoes through the kitchen.

We never again actually beat Matilda at her game after that day, but we did eventually receive a certain measure of victory one Christmas. You might say Matilda was the guest of honor for that Christmas feast.

From then on, there never was any chicken poop for the sole!

Curmudgeon responsible for this post: Hale McKay at 9:45 PM

You crack me up Mikey.

Great story! And I love the title :)

Matilda was smart! Too bad you ate her.

My great grandparents farm was in Wyoming Co. (Oceana) I used to rake dried corn across the wire fence to feed the chickens, but the only time I ever went into the coop was with my great-grandma. She didn't trust me not to break the eggs, I guess.

Good story Mike, my maternal Grandmother for many years submitted her income tax return as a Turkey Farmer, I don't recall her ever having geese but a turkey gobbler was a threat we took seriously.

Who would have ever thought that, so many years later, this would be something to look back on with a smile. Thanks for sharing the memory...I can just picture Matilda patrolling like an old sheep dog!

They use those same sayings in the south too...I heard them over and over growing up. (LOL) Enjoyed the story...

great story! REminds me of an old song that went, "Go tell Aunt Rhody, the old gray goose is dead."

One of our 'sentences' was