Out of Line On Line 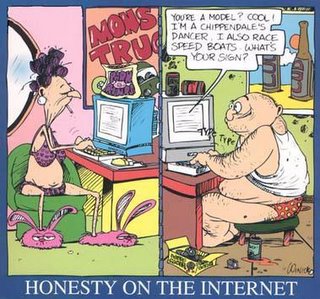 Do we really know who we are dealing with on the internet? In chat rooms - probably not. In game rooms - again, probably not. There is so much shit slung against walls to see if it sticks in those places, that I think the perpetrators begin to believe their own deceptions. As far as I am concerned, you schmooze you lose.

As for blogs, I think for the most part, you do get a sense of the person behind the screen name. Of course, I am referring to the faithful bloggers who post on a regular basis. If they are serious about their writing, a little bit of themselves can be found in their words. 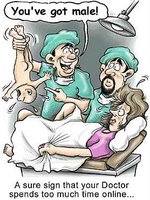 Of course, some people probably spend too much time on line. That goes for bloggers as well, and I include myself in that club.

The cartoon shows a doctor who obviously uses much of his spare time on line. He probably visits the same comedy club shown in 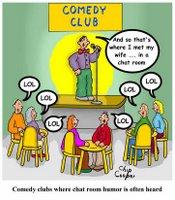 I have read other bloggers who have touched upon the use of "LOL" in real life situations. I have never come out and actually enuciated LOL, but I have caught myself about to say it aloud. It has been on the tip of my tongue and fortunately I have been able to suppress it. The same holds true for "ROFLMAO." Imagine the stares if you were to unleash that one in a live conversation.

I will admit that I do tend to talk to the computer, or more precisely at it! I feel safe in surmising that I am not alone on this one 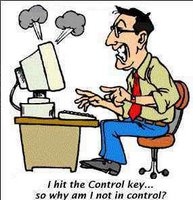 . In fact, my computer is no virgin to expletives deleted! How many times, I wonder was the computer innocent and it was I who was at fault? I think I have the edge, to be perfectly honest.

There is one improvement to the standard keyboard I would like to see. When there is a problem, I don't like leaving anything to chance, and this key would remove me from any resp 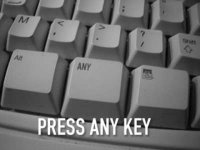 onsibility. Press any key ... Well I will as soon as I can find the damned thing!

Don't you just love all those cryptic error messages that pop up on your screen at seemingly the most inopportune times? "The Internet Explorer has detected an error. Your computer will now shut down." It does not shut down, but instead lulls you into a false sense of security by offering you what appears to be two options: Ok and Close This Window. The computer is again victim to a gauntlet of Catholic school yard slang when you discover that both options carry out the previous threat and shut down your computer.

Here is another especially lovely error message:
I don't know for sure, and maybe it is presumptuous of me, but isn't this the keyboard that my fingers are resting upon at this very moment? Even when I tap the CPU to get its attention and point at the keyboard, it insists it cannot find it. Trust me, picking up the keyboard and waving in front of the CPU does no good. "Hey, stupid! It's right her 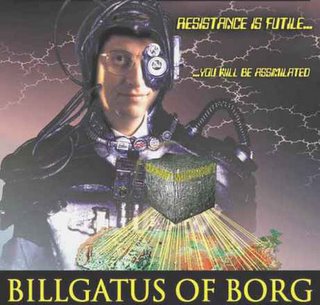 You are then overcome with the epiphanous answer to your problems. Microsoft has learned that you aren't using the most recent upgrades in your computer. World domination does not mean that insignificant peoples are overlooked. After all, the sum of the parts equal the whole. Resistance is futile.

Then out of the blue, you get the following error message. You fear the worst, you are being assimilated. But then ....

I feel safe now that I have learned I am not Lost in Cyberspace. Sometimes, however, I feel that my mind is Lost in the Space between my ears.

For my experience in truth in advertising, read my Paw Prints posting today. (or not) My friends told me that you're not supposed to be honest. I totally messed up.

Give me a frickin heart attack, Mikey!

"epiphanous"? You went and gone uptown on me, boy.

Ahh..and you just gotta love those Windows updates. You have to download and install an update to get your updates! Freakin' crazy!

I used to get a Mouse Not Found error all the time...never did figure out what THAT was all about.

And I talk to my computer too. Alla time.

Now you're not living alone in Crazyville.