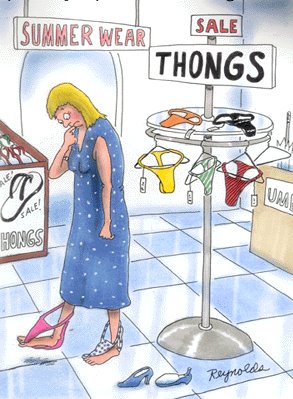 I have nothing against blondes, but I think that every concubine should include at least one. -Mae West

A blonde and a brunette were having lunch together. The blonde noticed that her friend wasn't talking much. She asked of her, "Are you okay? You haven't said a thing."
...."My boyfriend just sent me a dozen roses," she replied.
...."That's great!" said the blonde, "But why so glum?"
....The brunette sighed and said, "It means I'm going to have to spend the evening with my knees up in air."
...."Why?" asked the blonde puzzled. "Don't you have a vase?"

What she wouldn't have given for some roadside assistance. Before persuing her country and western singing career, Dolly Parton was an auto mechanic. It seems she had front end problems.

A blonde's diary reveals that she has had a bad year:
January - Took new scarf back to store because it was too tight.
February - Fired from pharmacy job for failing to print labels... "duh"... bottles won't fit in typewriter!
March - Got excited... finished jigsaw puzzle in 6 months... box said "2-4 years!"
April - Trapped on escalator for hours... power went out!!!
May - Tried to make Kool-Aid... 8 cups of water won't fit into those little packets!

Curmudgeon responsible for this post: Hale McKay at 7:45 PM

hehe your blog is very funny
keep on going i like it !

Very good...the cartoons are priceless.....Here's one more......A blonde was sitting on the train reading the newspaper.
The headline blared, "12 Brazilian Soldiers Killed".
She shook her head at the sad news, then turned to
the stranger sitting next to her and asked,......

"Wow that is really sad, how many is a Brazilian?"

i believe the PC way to say it now is...

She is not a "DUMB BLONDE" - She is a "LIGHT-HAIRED DETOUR OFF THE INFORMATION SUPERHIGHWAY."

Duke_of_Earle said...
This comment has been removed by a blog administrator.
4:45 AM

That's the best set, (oops, sets) of cartoons I've seen for quite a while Mike.

Sorry it took so long to comment~I had to scrape the white out off my computer screen so that I could read the post.